On the International Day for the Total Elimination of Nuclear Weapons marked on Saturday, the UN chief has underscored the need to “reverse course and return to a common path to nuclear disarmament”.

Almost 75 years since the adoption of the first General Assembly resolution in 1946, which committed the UN to the goal of ridding the planet of nuclear weapons, “the world continues to live in the shadow of nuclear catastrophe”, Secretary-General António Guterres said in his message commemorating the day.

Relationships between States possessing nuclear weapons are characterized by “division, distrust and an absence of dialogue”, he warned, noting that as they increasingly choose to pursue strategic competition over cooperation, “the dangers posed by nuclear weapons are becoming more acute”.

According to the UN chief, all States have a responsibility to ensure that such deadly armaments “eliminated completely” from national arsenals.

COVID in the mix

Drawing attention to the wide range of global fragilities brought about by COVID-19 – from pandemic readiness and inequality to climate change to lawlessness in cyberspace – the top UN official called “preparedness to address the threat of nuclear weapons” one of those vulnerabilities.

“We need a strengthened, inclusive and renewed multilateralism built on trust and based on international law that can guide us to our shared goal of a world free of nuclear weapons”, he said.

The UN has long upheld that the onus to lead disarmament is on the States that possess nuclear weapons.

He also stressed that they reaffirm the shared understanding that “a nuclear war cannot be won and must not be fought” and take steps to implement the commitments they have made.

Moreover, the countries possessing these weapons have well-funded, long-term plans to modernize their nuclear arsenals.

And while the number of deployed nuclear weapons has significantly decreased since the height of the Cold War, SIPRI attests that not one nuclear weapon had been physically destroyed pursuant to a treaty.

Mr. Guterres emphasized that the death, suffering and destruction caused by the atomic bombing in Hiroshima and Nagasaki “must not be repeated”.

“The only guarantee against the use of these abhorrent weapons is their total elimination”, spelled out the Secretary-General, adding that the UN “stands ready to work with all States to achieve this shared goal”.

♦ Receive daily updates directly in your inbox - Subscribe here to a topic.
♦ Download the UN News app for your iOS or Android devices.
disarmament|International Day for the Total Elimination of Nuclear Weapons|COVID-19|coronavirus

The lack of trust and cooperation among States, and the diminished faith in “the very multilateral institution that was designed to maintain global peace and security”, must be overcome, a high-level UN official told a prominent disarmament conference on Thursday. 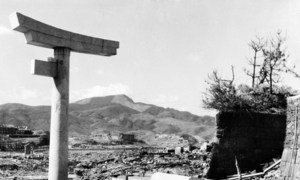