© World Bank/Visual News Associate
In Pakistan, students learn computing skills as billions of people globally are responding to the COVID-19 pandemic with the use of digital tools.

Throughout the COVID-19 pandemic, the General Assembly has worked hard, under “extraordinary circumstances” to uphold its vital mandates, perform essential services, and ensure continuity in the name of the people the Organization serves, the president of the UN body said on Tuesday.

At an end-of-session press conference,, Tijjani Muhammad-Bande recounted some of the important initiatives the 74th session had conducted throughout the coronavirus pandemic.

“The General Assembly successfully organized socially distanced elections for the General Assembly Presidency, the Security Council, and the Economic and Social Council (ECOSOC). Furthermore, we employed virtual methods to gather stakeholders from around the world on Charter Day, and once again at the multi-stakeholder hearing on the occasion of the 25th anniversary of the Fourth World Conference on Women”, he detailed.

The 75th session of the UN General Assembly session begins on 15 September and this year, due to #COVID19, it will be unlike any other in the organization’s three quarters of a century of existence🔹 https://t.co/M1wxpSHFqy#UNGA75 pic.twitter.com/WvxgMX9ghd

Mr. Muhammad-Bande also applauded the World Health Organization (WHO) for “leading the response from the outset”.

“Today’s meeting takes place as many people suffer and bear great losses due to the COVID-19 pandemic”, he said. “The entire UN system has rallied to address the needs of the people we serve”.

The UN official gave “particular thanks” to humanitarian workers in the field as well as UN Peacekeepers, “who continue to protect communities in the most complex environments around the world”.

Moreover, he acknowledged the leadership of the Secretary-General and the ECOSOC president .

The Assembly president underlined that these efforts are “critical” as we begin the Decade of Action and Delivery to implement the Sustainable Development Goals (SDGs), “or as it is likely to become, the decade of recovery from the COVID-19 pandemic”.

He closed by urging everyone to “galvanize multilateral action now” and fulfill the UN’s financing for development and other commitments.

“We remain in this together”, Mr. Muhammad-Bande concluded.

Mr. Muhammad-Bande told journalists that he was working with his successor Volkan Bozkir in the preparation of high-level week as well as upcoming events.

The UN official noted that Mr. Bozkir would be presiding over the opening of the 75th session of the Assembly, which will be convened on 22 September.

Among other things, the Assembly president informed that a Summit on Biodiversity will be convened on 30 September, and on 1 October, a High-level meeting to celebrate the 25th anniversary of the Fourth World Conference on Women and the adoption of the Beijing Declaration and Platform for Action.

On 2 October, he said that the Membership will gather to mark the International Day for the Total Elimination of Nuclear Weapons, which he noted, remains integral to the foundation of the UN's work on peace and security.

Mr. Muhammad-Bande told the journalists that it had been a privilege to serve as the President of the 74th session of the Assembly, expressing his confidence that the targets set out in the 2030 Agenda for Sustainable Development would be realized if everyone continues to strive together, and deliver for all.

UN Photo/Eskinder Debebe
Tijjani Muhammad-Bande, President of the the 74th session of the UN General Assembly.
♦ Receive daily updates directly in your inbox - Subscribe here to a topic.
♦ Download the UN News app for your iOS or Android devices.

Statements of the President of the General Assembly 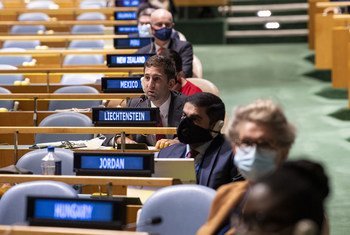 Adhering to physical-distancing guidelines, the General Assembly met fully in-person on Thursday for the first time in nearly six months, with its president urging all Members to “galvanize multilateral action…to deliver for all”, as the COVID-19 pandemic continues. 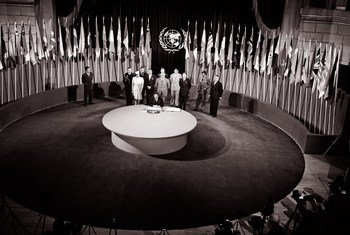 The UN Charter “brought rules and hope to a world in ruins”, Secretary-General António Guterres told a virtual ceremony on Friday, commemorating 75 years since the Organization’s foundational text was signed.