UNAMA/Mujeeb Rahman
The 100th anniversary of Afghanistan’s Independence was celebrated in Kandahar and across the country in August 2019 with hundreds of people taking to the streets with Afghan flags.

The first ever direct talks between Afghan Government representatives and the Taliban which began on Saturday, present “a major opportunity” to finally realise the “long-held aspirations” of the people, for a peaceful future, the UN chief has said.

In a special video message released as the historic negotiations got underway in Doha, António Guterres thanked the Qatari hosts for facilitating, and said the “consistent calls for an end to violence” by Afghans themselves, and the chance to develop the country after silencing the guns, “underpin today’s inaugural meeting.”

The start of intra-Afghan peace negotiations is a major opportunity to achieve the long-held aspirations of the people of Afghanistan for peace.It is crucial that all Afghan leaders &amp; members of the international community do everything possible to make peace a reality. pic.twitter.com/cTxWJT8829

“Afghans themselves must determine the content and nature of the negotiations”, added the UN chief. “An inclusive peace process, in which women, youth and victims of conflict are meaningfully represented, offers the best hope of a sustainable solution.”

The country has seen four decades of conflict, with thousands killed, but up until now, there have never been face-to-face talks between the militant group which controlled the country before being toppled by a US-led coalition in 2001, and the democratically-elected Afghan Government.

Saturday’s first meeting comes in the wake of a security agreement inked between the United States and Taliban representatives in February, which paved the way. Continued near-record violence and satisfying the complex preconditions, including prisoner exchanges, had jeopardized the talks throughout recent weeks.

Stressing the importance of women’s involvement, Mr. Guterres said all parties “must do their part to ensure that women participate in a variety of roles, and that the peace process reflects the experiences and expertise of Afghan women in all their diversity.”

He said the two temporary ceasefires that took place earlier in the year, offered an encouraging sign, but with negotiations now underway, “I urge the redoubling of efforts to protect civilians and to deescalate the conflict, in order to save lives and to create a conducive environment for the talks.

“It is my hope that progress toward peace can lead to the return of millions of Afghans displaced internally and across borders, to their homes in a safe, dignified and orderly manner.”

The UN chief said it was crucial that all Afghan leaders together with the international community, “do everything possible to make peace a reality. Please be assured of the readiness of the United Nations to support the process of intra-Afghan peace negotiations, and the sustainable development of the country."

In a statement issued on Friday, the head of the UN assistance mission in Afghanistan (UNAMA), Deborah Lyons, said the people had suffered “for far too long”.

“The UN joins the country’s brave and resilient people in urging all Afghan leaders and negotiators to seize this historic opportunity to end the fighting and usher in a new era of peace and prosperity.”

She said the negotiators now have a “unique opportunity to save the lives of many of their compatriots and to lift the country out of poverty and misery.”

“We wish them every success and the United Nations will be there to support them, as required.

Ms. Lyons stressed that “an immediate and unconditional reduction in violence would create a more conducive environment for constructive talks”, noting that “with continuing health and economic challenges posed by COVID-19, poverty and natural disasters, a humanitarian pause to the fighting would enable critical humanitarian support to reach the many millions requiring assistance across all areas of the country, as well as provide an opening for Afghans to start to rebuild their lives and livelihoods and give their children hope.” 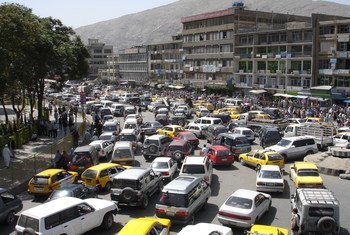 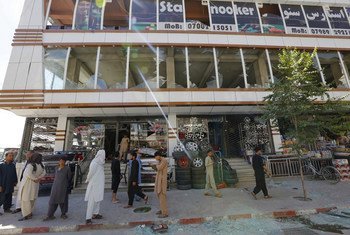