UNAMA/Mujeeb Rahman
The 100th anniversary of Afghanistan’s Independence was celebrated in Kandahar and across the country in August 2019 with hundreds of people taking to the streets with Afghan flags.
29 February 2020
Peace and Security

On Saturday the United Nations called for further reductions in violence in Afghanistan, and for the conditions for intra-Afghan peace talks to be met, following the announcement of an agreement between the United States and the Taliban.

On February 29, the United States and the Taliban signed a peace agreement in Doha, the capital of Qatar, which includes guarantees to prevent groups hostile to the US operating on Afghan soil, and for a timetable for the withdrawal of all foreign forces from Afghanistan.

The agreement also indicates the Taliban’s participation in internal Afghan peace talks from March 10, and stresses that a "comprehensive and permanent ceasefire" will be on the agenda of any talks.

Via a statement released by his spokesperson, Stéphane Dujarric, UN Secretary-General António Guterres commended efforts to achieve a "lasting political settlement" in Afghanistan. "Today's events in Doha and Kabul mark an important development in this regard", he said.

The UN chief expressed his gratitude to Qatar for hosting the talks between the United States and the Taliban, and highlighted the importance of further reducing violence at the national level, for the benefit of all Afghans and, said Mr. Dujarric, “encourages the continued efforts of all parties to create an environment conducive to intra-Afghan negotiations and a comprehensive peace process”.

Mr. Guterres expressed his hope that the “deeply held aspirations of the Afghan people for peace” will be realized through an inclusive Afghan-led process with the meaningful participation of women and young people. "The Secretary-General reiterates the United Nations commitment to support the people and the government of Afghanistan," said his spokesperson.

The agreement signed between the United States and the Taliban comes after a seven-day period of reduced violence in Afghanistan. The United Nations Assistance Mission in Afghanistan (UNAMA) welcomed the successful conclusion of this relatively calmer period, which is expected to lead to the start of intra-Afghan negotiations.

"All stakeholders must now look to take genuine and concrete steps to end the war," said Tadamichi Yamamoto, the Special Representative of the UN Secretary-General in Afghanistan, in a press release issued on Saturday.

“The UN welcomes the commitment expressed by the parties to the intra-Afghan negotiations; and urges them to move quickly in their preparations to start negotiations, including by forming a truly representative negotiating team”, said the UN mission.

The United Nations, continued the statement, reiterates its readiness to support an inclusive Afghan-led process that defends the human rights of all citizens and leads to lasting peace in Afghanistan, stressing the importance of “continuing to reduce violence, especially violence that harms civilians, and urges all parties, in the period ahead, to redouble efforts to reduce violence on the way to a permanent ceasefire and a lasting political settlement”.

US forces and their allies have been present in Afghanistan since 2001.

♦ Receive daily updates directly in your inbox - Subscribe here to a topic.
♦ Download the UN News app for your iOS or Android devices.
Afghanistan|unama 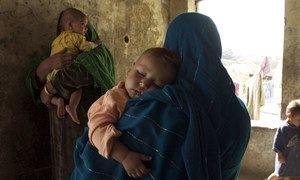 More than 10,000 civilians in Afghanistan were killed and injured last year, according to a new United Nations report that details record-high levels of civilian harm in the ongoing conflict. 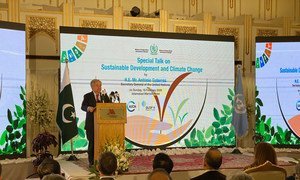