Across Lebanon, “the needs are immediate, and they are huge” in the aftermath of the explosion that destroyed Beirut city port, UN agencies said on Friday.

Latest reports indicate at least 150 fatalities and thousands of wounded, but that figure is likely to rise, as rescuers search the port for survivors.

World Health Organization (WHO) Spokesperson Christian Lindmeier said that many people were still missing and that hospitals were overwhelmed.

Three facilities are “non-functional” and two more have been partially damaged, he told journalists via videoconference in Geneva, adding that the disaster took a total of hospital 500 beds out of action.

To help those affected by Tuesday’s catastrophic explosion in #Beirut, UNHCR is participating in the humanitarian response, especially with shelter and health contributions. https://t.co/VxNu4ORYEY

“The immediate focus now is on the trauma care and the search and rescue of course still, that’s very important, there’s still people under the rubble and there’s still people alive under the rubble from what we can see from the media reports; and that is the first priority now, and of course bringing in supplies, food, shelter also, medicines, medical equipment for trauma situations but for all the other diseases that cannot be treated now in hospitals”, he informed the journalists.

Amid concerns about the potentially harmful dust created by the explosion of some 2,750 tonnes of ammonium nitrate, the WHO spokesperson noted that the Lebanese health ministry had reported a decrease in toxicity level two hours after the blast.

Assisting the most vulnerable

The most pressing priority is to get assistance to the most vulnerable, including those requiring emergency medical help from hospitals already overwhelmed by COVID-19 patients.

This task has become even more challenging in that many shipping containers carrying personal protective equipment (PPE) needed for the pandemic response were lost in the blast.

“What we know so far is that 10 containers of PPE material that was procured by the ministry of public health have been destroyed”, said UN Children’s Fund (UNICEF) spokesperson Marixie Mercado. “These contained hundreds of thousands of masks, gloves, gowns, all critical for the response. We have already placed orders to replace some of this material and we have prioritised the delivery of pre-existing orders of PPE for Lebanon now”.

To ensure immediate ongoing help, WHO has appealed for $15 million.

No water or electricity

The homes of at least 80,000 children had been damaged in the blast, Ms. Mercado continued, noting that many houses were now without water or electricity.

At the same time, COVID-19 cases have spiked, she added, with a record 255 infections registered on Thursday.

To date, Lebanon has seen 70 COVID-19 deaths and 5,672 cases in total, while the areas around the blast site are among the most active clusters of transmission.

“It is impossible for those affected to practise safe distancing and there is desperate need for masks, but for most people right now COVID is not top of mind”, the UNICEF official said, in an appeal for an initial $8.25 million for the emergency response.

© UNOCHA
Neighbourhoods facing the port of Beirut were extensively damaged by the explosion.

Also assisting in the response, the UN refugee agency, UNHCR, said it feared that several of the casualties “may also include refugees living in Beirut”.

In total, Lebanon hosts 1.5 million people displaced by conflict, many from neighbouring Syria.
“Some of the areas severely affected by the powerful blast included neighbourhoods that hosted refugees”, said UNHCR Spokesperson Charlie Yaxley.

“We have received initial, yet unconfirmed reports of several deaths among refugees in Beirut. We work with the rescue teams and other humanitarian workers to help with identification and support to grieving families”.

Initial assessments indicate that hundreds of thousands of people have had their homes destroyed or damaged, creating a “massive” need for shelter, the agency believes.

“UNHCR is making available its in-country stocks of shelter kits, plastic sheets, rub-halls, and tens of thousands of other core relief items including blankets and mattresses for immediate distribution and use”, Mr. Yaxley said.

In a bid to boost the UN’s health response to COVID – and now to Tuesday’s disaster – the Geneva-based agency has provided medical supplies and equipment, ventilators, and patient beds.

“A second phase is being expedited in light of the saturation of hospitals”, said Mr. Yaxley. “This support will help decrease the pressure on the currently overwhelmed hospitals and allow more patients to be treated promptly” . 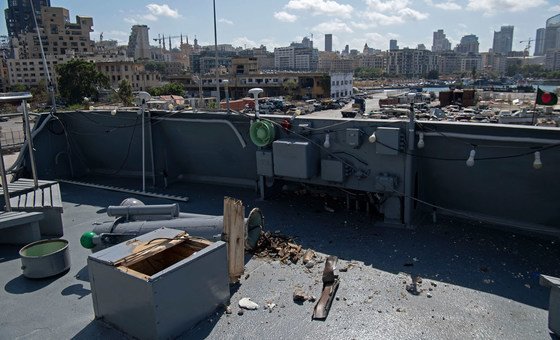 In a related development, the World Food Programme (WFP) announced that it will import wheat flour and grain to help boost food security across Lebanon as the country works to rebuild Beirut port, where huge cereal silos were destroyed.
Announcing the move on Friday, the UN agency said it is in “close” discussions with authorities to coordinate the emergency response.

The move comes amid concerns that the explosion will worsen an already grim food security situation that has coincided with a profound financial crisis and the COVID-19 pandemic.

A recent WFP survey found that food has become a major source of concern in Lebanon since the lockdown, with one-in-two people worried about not having enough to eat.

To help some of the most vulnerable, the agency is allocating 5,000 food parcels for blast-affected families.

Each food package is enough to feed a family of five for one month, with basic food items such as rice, chickpeas, tuna, salt and tomato paste.

From bad to worse

Highlighting the dire situation affecting Lebanon’s people even before Tuesday’s disaster, the UN human rights office (OHCHR) urged the international community “to step up” and help the country “at their time of crisis”.

“With large swathes of the city unfit to live in, the country’s principle port all but destroyed and the health system on its knees, the situation is dire”, OHCHR Spokesperson Rupert Colville said.

With large swathes of the city unfit to live in, the country’s principle port all but destroyed and the health system on its knee -- OHCHR

Spiralling out of control

Just a month ago, High Commissioner for Human Rights Michelle Bachelet warned that amid a longstanding economic and political crisis and the effects of the COVID pandemic, Lebanon was “fast spiralling out of control”.

She urged the Government and others to enact urgently needed reforms, Mr. Colville said, while also calling on the authorities to address needs, such as shelter, food, electricity, health and education.

Any investigation into the disaster must be fast, impartial and thorough, the OHCHR spokesperson continued, and it should also satisfy the “anger” of all those affected towards the Lebanese Government, he insisted, referring to the public mood during French President Emmanuel Macron’s visit to the blast site on Thursday.

Underscoring that the investigation must satisfy the public, he maintained: “It’s important to be fast, it’s equally important to be thorough, impartial and transparent – not necessarily international”.

Some elements have been “aired” extensively, Mr. Colville continued, in reference to the apparent origins of the ammonium nitrate that exploded, “how it got there” and “why it’s been in that warehouse for seven years”. 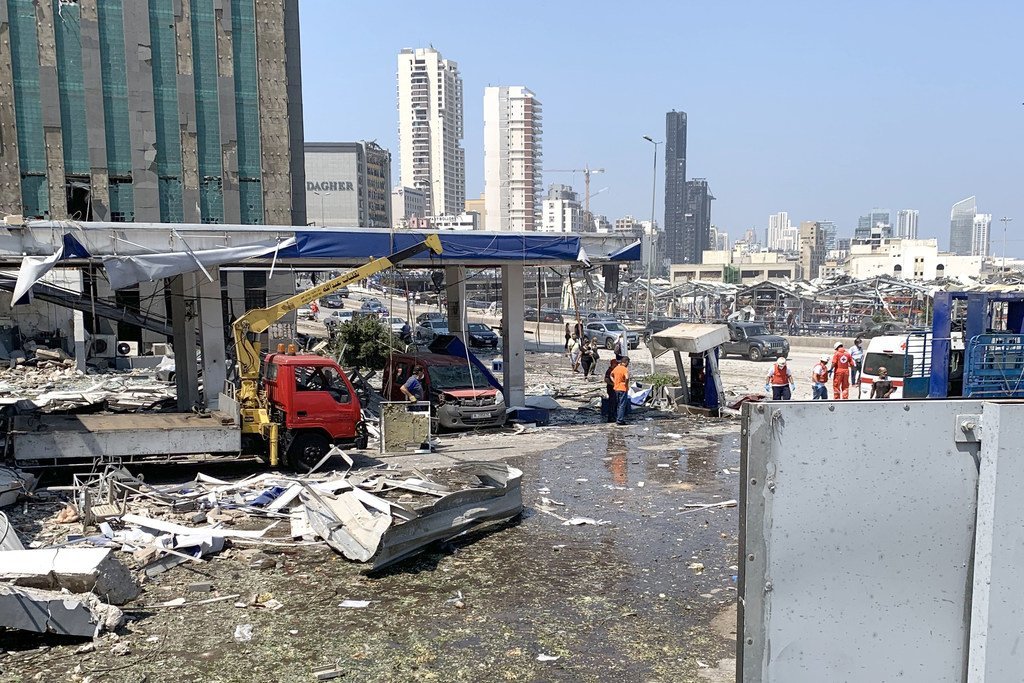 Houssam Yaacoub
A gas station located closed to the port of Beirut after the blasts.
♦ Receive daily updates directly in your inbox - Subscribe here to a topic.
♦ Download the UN News app for your iOS or Android devices. 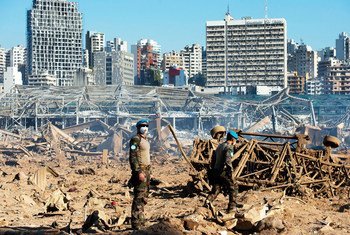 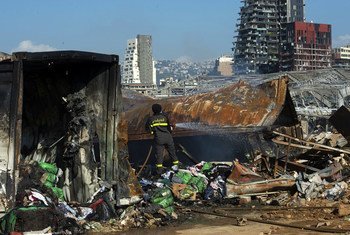