UNIFIL
Large swaths of Beirut were destroyed as a result of the explosion in the city's port.

More than 130 people were killed in the blast, which ripped through the port and surrounding area, causing countless injuries and leaving thousands homeless. The Government has declared a two-week state of emergency.

My deepest condolences to families of victims of the horrific explosions in Beirut, and to the people &amp; Government of Lebanon. I wish all injured, including United Nations personnel, a speedy recovery. The @UN remains committed to supporting Lebanon at this difficult time.

“The World Health Organization (WHO) is working closely with the Lebanese Ministry of Health to conduct an assessment of hospital facilities in Beirut, their functionality and needs for additional support, particularly amid the COVID-19 pandemic”, he said.

“Specialists are being dispatched to Beirut at the moment to assist in the emergency response, both from the United Nations and multiple Member States. Experts are en route to support urban search and rescue operations. Teams are also equipped to conduct rapid assessments about the situation on the ground and help coordinate emergency response activities.”

Beirut’s port is the main port in Lebanon and is critical for both the country and UN activities in Syria, as Mr. Haq explained.

“We expect that the damage to the port will significantly exacerbate the economic and food security situation in Lebanon, which imports about 80-85 per cent of its food”, he said, responding to a journalist’s question.

“Our colleagues at the Office for the Coordination of Humanitarian Affairs (OCHA) also expect that this will affect our ability to provide aid to Syria because the port in Beirut was one of the ways that we ship in aid, and of course we also use the airports, so we’ll need to find alternate plans.”

UNIFIL
Grain silos in Beirut's port were destroyed by the explosion.

WFP said the explosion and the damage to the port will worsen “the grim economic and food security situation in Lebanon”, which was already facing its worst ever economic crisis, compounded by the COVID-19 pandemic.

“A recent WFP survey on the impact of the economic crisis and COVID-19 outbreak and subsequent lockdown measures on livelihoods and food security, revealed that food has become a major source of concern with 50 percent of Lebanese saying over the past month they felt worried they would not have enough food to eat”, the agency said on Wednesday.

The UN is looking at all options to find ways to provide financial assistance for the ongoing response efforts.

The Organization has been heartened to see that governments across the world have declared their support for Lebanon, said Mr. Haq, who recalled that the country has been a haven for people fleeing war and persecution.

A home for refugees

Lebanon, which has a population of around six million, has taken in nearly 900,000 Syrians and more than 200,000 Palestinian refugees, as well as more than 18,000 other displaced people from nations such as Iraq and Sudan.

The UN refugee agency, UNHCR, expressed solidarity with the Lebanese people in the aftermath of the massive explosion.

UN High Commissioner for Refugees, Filippo Grandi, the agency’s chief, issued a statement saying “our heartfelt condolences go to the families who have lost their dear ones. Our thoughts are with those who are hurt and injured.”

UN staff in Lebanon and their dependents are among those affected by the explosion, with around 100 receiving treatment, according to Mr. Haq. He further reported that two family members of UN staff have died.

‘A state of shock’

The UN Children’s Fund (UNICEF) revealed the impact on its team in Lebanon.

“One of our colleagues lost his spouse, seven of our staff were mildly injured and dozens of colleagues’ homes were damaged”, said Yukie Mokuo, UNICEF Representative for Lebanon, in a statement on Wednesday.

“Most of our staff – as are most people in Lebanon – are in a state of shock.”

UNICEF is coordinating with the Lebanese authorities and partners to respond to needs.

The agency has provided drinking water to staff at the Beirut port while assisting health officials in rescuing medicines and vaccines that remained in a warehouse there. Its partners on the ground are providing psychosocial support to children across the city.

“Yesterday’s catastrophe in Beirut adds to what has already been a terrible crisis for the people of Lebanon compounded by an economic collapse and a surge in COVID-19 cases. The pandemic already meant that hospitals are overwhelmed, and front-line workers are exhausted”, said Ms. Mokuo.

She added that UNICEF will be stepping up efforts to reach families in need over the coming days. 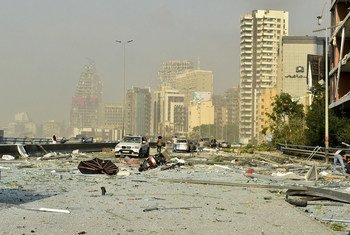