At a virtual briefing on Monday, high-level UN officials detailed how the situation is unfolding on the ground and what the Organization is doing to assist.

“The legendary strength of the Lebanese people now faces an additional test”, said UN Secretary-General António Guterres. Almost a week after the blast produced “a colossal toxic cloud that was visible for miles”, he lamented that “many people remain missing”.

The #BeirutExplosions destroyed 10 containers of critical supplies. @UNICEF is already replacing them.

Thousands of #PPE and medical items are en route to #Beirut from our Copenhagen supply hub to support @UNICEFLebanon’s relief efforts and ongoing work for children in #Lebanon. pic.twitter.com/HhPyRktZSP

In an instant, the explosion “flattened vital infrastructure and shattered windows near and far”, he stated. “Surrounding neighborhoods were levelled. Many thousands are now homeless”.

And three hospitals were left inoperable, while two others sustained substantial damage. “The shock waves were felt across the city – and indeed across the Mediterranean”, the UN chief said, adding that “the economic, social and other reverberations” will continue for some time.

According to news reports, Lebanon’s Prime Minister took to national television late on Monday, to announce his resignation along with that of the Government, citing endemic political corruption.

Against the backdrop of economic hardship, COVID-19 and multiple other challenges, Mr. Guterres lauded the Lebanese people for remaining “generous hosts” to large Palestine and Syrian refugee communities.

In the past few days, the UN chief said he’d seen “that spirit yet again”, as neighbours help neighbours clear the streets of broken glass, “opening their homes to those who have lost theirs.”

“I call for robust international support for all people in need in Lebanon, especially women and girls who are most vulnerable in times of crisis”, he underscored.

And while thanking those countries that are already providing “tangible financial, material and specialized assistance”, he urged donors to give “speedily and generously”.

Listen to the people

At a time of both sorrow and prolonged frustration, the UN chief maintained that “the anger of the Lebanese people is palpable” and “their voices must be heard”.

He called for a “credible and transparent investigation” to determine the exact cause of the explosion and bring about the accountability “demanded by the Lebanese people”. He said long-term political reform was also needed.

Noting that profound sense of loss and disbelief, he noted that Lebanon was resilient. “Lebanon has immense spirit and will”, he said, while also underscoring that it is not alone. 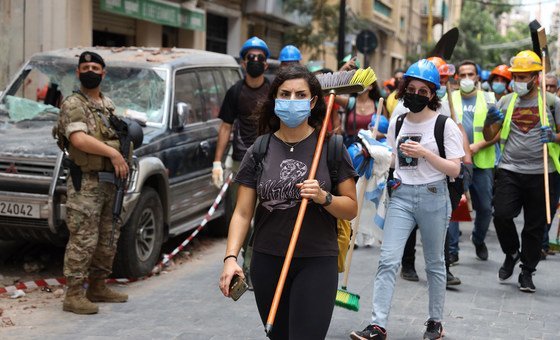 He pledged the Organization would continue its support for Beirut and the people of Lebanon “in every possible way” and vowed that the UN would stand in unity to help “alleviate the immediate suffering and support its recovery” .

Chairing the meeting, UN Emergency Relief Coordinator Mark Lowcock said the the “swift and wide-ranging” humanitarian response was in its first of three phases.

He said that the second, recovery and reconstruction, would “cost billions of dollars and require a mix of public and private finance”, while the third will be to respond to the Lebanon’s pre-exciting socioeconomic crisis, which is already exacerbated by COVID-19.

“Tuesday’s blast will have repercussions far beyond those we see in front of us now”, he warned, encouraging donors to “come together and put their shoulder to the wheel” for collective response to the Lebanese people.

In closing, he said that the blast “ripped through any pretence that all is well in Lebanon”.

“The Lebanese people…are telling us they’ve had enough”, declared the Humanitarian Coordinator.

Meanwhile, President of the General Assembly Tijjani Muhammad-Bande upheld that the devastating impact of last week’s explosion makes it “imperative for the international community to stand beside the [Lebanese] people”.

Stressing that their needs are enormous and great”, he evoked the need for a multilateral approach, building consensus, and for providing “the necessary help and support to prevent crises of this magnitude in the future”.

“The people of Lebanon have shown us the true spirit of their proud country”, said Mr. Muhammad-Bande. “It is upon us to band together and ensure that they will not have to shoulder this burden alone”.

© UNOCHA
Young man stares out from his apartment after a blast at Beirut Port ripped through the city, Lebanon.

UN Resident Coordinator Najat Rochdi spoke passionately about the Lebanese people and the country for which she is also the Humanitarian Coordinator.

“I am addressing you today, with a heart full of sorrow, from a small country in the Middle East…that has struggled a lot and yet still has the will, beyond all odds, to survive and strive”, she said.

She recapped the events of 4 August when a warehouse at the Beirut Port exploded shattering the city and pushing the people “further to the brink”.

More than 200 had now reportedly died, and around 6,000 or so have sustained injuries caused by the blast. Ms. Rochdi painted a picture of “apocalyptic images of destruction, fear and sorrow” and damage so extensive that it has affected the city at its economic heart, destroying swathes of commercial and residential neighborhoods.

In this “challenging context”, she commended the work of the UN and non-governmental organizations which have been involved in the response from the very first moment, “demonstrating a remarkable sense of service and dedication to save lives”.

Ms. Rochdi elaborated on the response to date and reaffirmed that the UN and its partners “are here to stay and deliver” in the country. “We owe it to the people of Lebanon”.

Speaking from Beirut, World Food Programme (WFP) Executive Director David Beasley confirmed that the damage is “as bad as you can possibly imagine”.

Explaining that 85 per cent of the country’s food is imported and that it came through Beirut Port, he maintained the urgency of quickly getting the port up and running, saying that he believed it could be temporarily operational in two to three weeks.

However, as this requires an operational port, he appealed to donors to “step up now”, saying there was no time to waste.

Right from the source

After the meeting, Ms. Rochdi was a guest at the UN spokesperson's regular press briefing:

♦ Receive daily updates directly in your inbox - Subscribe here to a topic.
♦ Download the UN News app for your iOS or Android devices.
Beirut|Lebanon|Middle East 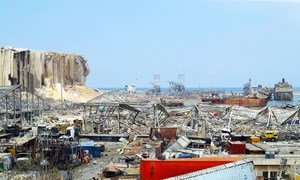 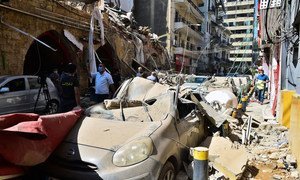