UN Ukraine/Volodymyr Shuvayev
Shoppers are checked for fever at the entrance to shops. Wearing masks inside a store is mandatory in Kyiv, Ukraine
8 June 2020
Health

The COVID-19 pandemic is worsening globally, with more than 136,000 cases recorded on Sunday: the highest number in a single day, according to the World Health Organization (WHO).

“More than six months into this pandemic, this is not the time for any country to take its foot off the pedal”, said WHO chief Tedros Adhanom Ghebreyesus, speaking on Monday during his regular briefing on the crisis.

Although the situation in Europe is improving, globally it is worsening"-@DrTedros

“This is the time for countries to continue to work hard, on the basis of science, solutions and solidarity.”

WHO said more than 100,000 cases have been reported on nine of the past 10 days, culminating in the highest one-day total so far, on Sunday.  Most cases came from 10 countries, mainly in the Americas and South Asia.

While the situation in Europe is improving, “globally it is worsening”, Tedros told journalists.

“Most countries in the African region are still experiencing an increase in the number of COVID-19 cases, with some reporting cases in new geographic areas, although most countries in the region have less than 1,000 cases. We also see increasing numbers of cases in parts of Eastern Europe and central Asia”, he said.

While encouraged by “positive signs” in some nations, Tedros warned against complacency, especially as countries begin to open up.

With millions taking to the streets in anti-racism protests, WHO is underlining the importance of remaining safe during mass gatherings.

Demonstrations have been taking place in several cities across the globe, sparked by the 25 May death of George Floyd, an African American, while in police custody, in Minnesota.

“WHO fully supports equality and the global movement against racism. We reject discrimination of all kinds”, said Tedros.

Protestors were reminded of measures to prevent COVID-19 spread, such as maintaining physical distance and wearing a mask.

“We also encourage countries to strengthen the fundamental public health measures that remain the basis of the response: find, isolate, test and care for every case, and trace and quarantine every contact”, he added.

Trapped at sea…and on land

Measures aimed at containing the new coronavirus have left as many as 200,000 seafarers trapped for months aboard ships around the world, the International Labour Organization (ILO) said on Monday.

The UN agency first raised the alarm in April as these workers have been refused permission to leave their ships.

The ILO has called on governments to adopt measures to facilitate crew changes and repatriations, while taking steps to minimize the risk of contagion.

Although many seafarers completed their official tours of duty more than four months ago, their contracts were extended due to the pandemic.

Some are reportedly experiencing mental health issues and exhaustion, which is reducing their ability to safely carry out their duties.

Meanwhile, many of their colleagues on land have lost their incomes because they cannot return to sea.

♦ Receive daily updates directly in your inbox - Subscribe here to a topic.
♦ Download the UN News app for your iOS or Android devices.
WHO|COVID-19|coronavirus|discrimination 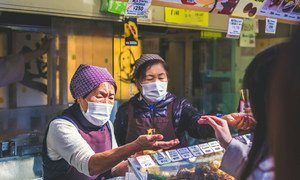 WHO urges mask use in confined public areas, where coronavirus still spreads

Governments in areas with widespread COVID-19 transmission should encourage the use of non-medical masks on public transport, in shops and in other locations where physical distancing is difficult, the World Health Organization (WHO) recommends, in updated guidance published on Friday. 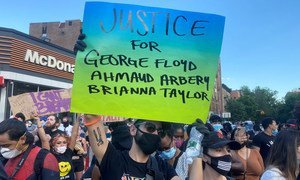