© UNDP/Mirfozil Khasanov
A new law in Uzbekistan has confirmed the right to citizenship for tens of thousands of stateless people.

United Nations Secretary-General António Guterres has congratulated Uzbekistan on the passage this week of legislation set to end statelessness for some 50,000 people in the Central Asian country.

In a statement issued late Thursday evening by his spokesperson, the UN chief said that in granting nationality to those who previously had none, Uzbekistan is “profoundly bettering” the lives of a too-often invisible and vulnerable population.

“The Secretary-General commends this achievement as an important contribution to global efforts to end statelessness worldwide by 2024,” the statement continued.

The development is a signal of Uzbekistan’s strong commitment to leave no one behind as the world enters the Decade of Action for the Sustainable Development Goal (SDGs).

Meanwhile, earlier this week, the United Nations High Commissioner for Refugees (UNHCR) said a provision in the Citizenship Law – signed by President Shavkat Mirziyoyev on Friday  –  will come into effect on 1 April, conferring citizenship to registered stateless people who were granted permanent residence in Uzbekistan before 1 January 1995.

UNHCR, which provided recommendations to Uzbekistan during the drafting process, said authorities estimate that around half of the country’s stateless population – some 49,228 people – will benefit from the new provision and be recognized as citizens.  Their children will also be eligible for citizenship through the same process.

According to UNHCR, the new law also includes provisions to prevent statelessness, and for the first time, introduces simplified naturalization procedures, which will come into effect in September and benefit registered stateless people who acquired permanent residence permits after 1 January 1995.

“Uzbekistan has made significant progress in resolving and preventing statelessness in recent years and this development is a huge leap forward in ending known cases of statelessness. Tens of thousands of people now have the opportunity to belong,” said Yasuko Oda, UNHCR Representative for Central Asia.

There are 97,346 documented stateless people in Uzbekistan, according to UNHCR.  Statelessness in the country and across the region is largely a result of the dissolution of the Soviet Union in 1991 and the formation of new States, which left hundreds of thousands throughout Central Asia stateless. 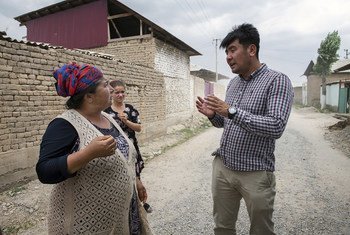 A rights lawyer who took to horseback to help more than 10,000 stateless people gain nationality in Kyrgystan after the break-up of the Soviet Union, has been awarded the UN refugee agency’s prestigious 2019 Nansen Refugee Award.