OHCHR
At least 18 people died during clashes at protests in the Uzbek region of Karakalpakstan.

The UN human rights chief called on Tuesday for a prompt, impartial and “transparent investigation” into the deaths of at least 18 people during clashes at protests in the Uzbek region of Karakalpakstan last Friday.

“The reports we have received about serious violence, including killings, during the protests are very concerning,” said High Commissioner Michelle Bachelet, while calling on authorities to “exercise utmost restraint”.

According to the Prosecutor General’s office, 18 people were killed and 243 injured, including 94 seriously, during the clashes between protesters and security forces in the regional capital, Nukus.

But the actual number of casualties may be far higher, according to the UN human rights office (OHCHR).

While the identities of those who died was not immediately clear, they reportedly suffered bullet wounds to the head and body.

“To ensure accountability, I urge the authorities to immediately open a transparent and independent investigation into any allegations of criminal acts committed in that context, including violations by agents of the State,” said Ms. Bachelet.

Around the autonomous region, thousands protested against planned constitutional changes that would have stripped the Republic of Karakalpakstan of its constitutional right to secede, which is based on a nationwide referendum.

The President said on Saturday those plans would be dropped.

After the violence, media reported a heavy military presence in the city, as the Government imposed emergency regulations, including a curfew and internet shutdown.

The city was reportedly quiet over the weekend and yesterday.

However, during and after the protests, more than 500 people were detained.

The UN human rights chief expressed concern that one person had already been charged and faces up to 20 years imprisonment “for conspiracy to seize power or overthrow the constitutional order”.

“People should not be criminalized for exercising their rights,” she said.

All detainees should have prompt access to a lawyer, their due process and fair trial guarantees, according to Ms. Bachelet.

“Under the International Covenant on Civil and Political Rights, to which Uzbekistan is a State Party, everyone has the right to freedom of expression, peaceful assembly and the right to participate in public affairs”.

She urged the Government to immediately restore internet access, stressing that such a ban has an indiscriminate reach and broadly impacts the fundamental rights to freedom of expression, and access to information.

The High Commissioner also reminded authorities that restrictions under emergency law must abide by international law; be necessary, proportionate and non-discriminatory; of a limited in duration; and include key safeguards against excesses. 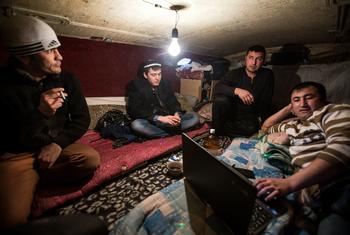 As the UN marks the International Day of Family Remittances on Thursday, there is concern that economic contraction and job losses in Russia - likely to now rise further as a result of sanctions imposed since the invasion of Ukraine - are already having an impact on remittance-dependent communities in Central Asia, according to experts with the International Organization for Migration (IOM).