World Bank/Scott Wallace
For Yemen to transition away from conflict, power must be shared among different political and social components, including women and civil society.
12 March 2020
Peace and Security

Yemen is at a “critical juncture”, the UN Special Envoy for the country told the Security Council on Thursday. Speaking via video-link, Martin Griffiths said that the combatants will either move towards de-escalation or greater violence, which would make “the path to the negotiating table more arduous”.

Houthis rebels have been fighting the internationally-recognized Government and their allies, for control of Yemen since 2014.

Mr. Griffiths updated the Council that “the most alarming military escalation” has taken place in Al Jawf, the governate east of the Houthi-held capital city, Sana’a, and expressed concern that the surge in fighting there may trigger conflicts in other governorates that would “drag Yemen into a new and irresponsible cycle of violence”.

The UN envoy underscored that “thousands of families have been displaced by the recent fighting and are in critical need of shelter and assistance”, and reiterated that indiscriminate attacks on civilians are “unlawful and reprehensible”, urging them to exercise “maximum restraint”.

Recapping visits to Ma’rib and Sana’a, Mr. Griffiths said he’d visited the latest conflict zone, where he met with a wide host of interlocuters in a bid to stop the fighting.

“I wish to be very clear, there is no justification for military escalation in Marib”, he told the Chamber, “Ma’rib must not become the next epicenter of Yemen’s tragic conflict”.

The UN envoy also spoke of continued clashes in Hudaydah, particularly in the city and the southern part of the governorate, in which civilians are bearing the brunt.

Moreover, he observed “with much concern”, violence elsewhere, including clashes in the governorates of Al-Dhale, Shabwa, Taiz and Saada and warned of “a real risk of a protracted military escalation across much of the country”.

“We must do all we can to support the parties in containing and reversing the current trajectory”, he said.

“It is imperative that the parties agree to participate in a public, accountable, nationwide de-escalation mechanism, that quiets the tempo of war, and steers Yemen off this precarious path”.

The UN envoy also condemned the death sentences handed down by a court in Sana’a earlier this month to 35 Yemeni parliamentarians, calling “the fragmentation and politicization of the judiciary and other institutions” a “serious cause for concern”.

Despite his alarming report, Mr. Griffiths said he had also received messages of reassurance saying that “the expeditious resumption of a peaceful political process remains within reach”.

The parties have exhibited some willingness to continue engaging in confidence-building measures, including in a large-scale prisoner exchange and in ensuring the medical air bridge flights to allow Yemeni patients to travel abroad for medical assistance.

“But much more must be done”, he stated.

In closing, he expressed frustration that the political process had been stalled since the last round of official peace talks back in 2016.

“We must maintain focus on reviving a process that ushers into Yemen an inclusive transition away from conflict”, he stressed, articulating that during a transition, “power will need to be shared among different political and social components, including women and civil society, in the spirit of partnership and consensus”.

Moreover, transitional security arrangements will need to be agreed upon and Yemenis will need guarantees of humanitarian relief, reconstruction and economic recovery across the country.

“Let us hope that this soon will become the reality for Yemen”, concluded the UN envoy.

Acting Assistant Secretary-General for Humanitarian Affairs Ramesh Rajasingham noted that escalating hostilities in the country have “pushed peace further away than it had seemed just six weeks ago”.

“This is dangerous territory”, he told the Council, calling for all parties “to freeze military activities and work towards de-escalation”.

He maintained that the renewed fighting underlines the urgency of tackling five priority issues: protecting civilians and respect for international humanitarian law; humanitarian access and delivery; funding for the UN aid operation; the Yemeni economy; and progress towards peace.

While flagging the need for a nationwide ceasefire, he called on the parties to spare civilians and meet the essential needs of those displaced by of the fighting.

The UN official told the Council that a number of humanitarian projects have been awaiting approval for months and noted that insecurity remains a challenge.

Pointing to preliminary data collected over the last several weeks, he said that aid is saving millions of lives and having a “pronounced effect on countering severe food insecurity”.

“However”, he acknowledged, “with delays in key assessments in the north and the south, it is not yet possible to quantify any changes over the last year or to confirm whether there are pockets of large, unmet needs”.

In closing Mr. Rajasingham said: “Now is the time to take the bold steps…that will give the people of Yemen hope that political dialogue, not war, will prevail in their country”.

“Humanitarians have been remarkably successful in mitigating some of the worst consequences of this crisis for civilians”, he concluded. “But only a political solution can end the crisis altogether”.

♦ Receive daily updates directly in your inbox - Subscribe here to a topic.
♦ Download the UN News app for your iOS or Android devices.
Yemen|security council|Middle East 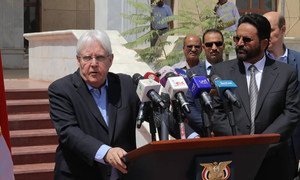 In a visit to northern Yemen on Saturday, UN Special Envoy Martin Griffiths repeated his call for an immediate freeze on military activities and for warring parties to work towards a de-escalation in fighting. 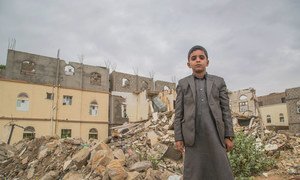 A recent escalation in fighting between warring parties in Yemen contradicts their stated desire to peacefully end nearly five years of conflict, UN Special Envoy Martin Griffiths said in a briefing to the Security Council on Tuesday.