Ismini Palla
Special Envoy for Yemen, Martin Griffiths, talks to journalists during a visit to Marib
7 March 2020
Peace and Security

In a visit to northern Yemen on Saturday, UN Special Envoy Martin Griffiths repeated his call for an immediate freeze on military activities and for warring parties to work towards a de-escalation in fighting.

Mr. Griffiths was speaking during  a one-day visit to Marib, which he described as a “haven” amid the ongoing conflict between government forces, backed by a Saudi-led coalition, and Ansar Allah, also known as Houthis.

The UN Special Envoy for #Yemen, Martin Griffiths, visits #Marib today to reiterate his call for calm and the resumption of the political process. Mr. Girffiths is scheduled to meet local authorities, tribal chiefs, civil society, women and youth as well as displaced Yemenis. pic.twitter.com/JQetOe2rTl

“Last week I issued a public call for a freeze on military activities. Today, I am reiterating that call for an immediate and unconditional freeze and the start of a comprehensive and inclusive and accountable de-escalation process”, he told journalists.

While in Marib, Mr. Griffiths met with the Governor and other senior officials, and with local authorities, tribal chiefs, civil society, women, youth, and displaced people.

“Marib has been an island of relative stability and calm amid the insanity of the war”, he said. “The parties need to ensure that Marib will remain a haven and not become the next epicenter of the fighting and of the war.”

The envoy underscored the UN position that the conflict cannot be solved on the battlefield.

He said Yemen is at a critical juncture: “We will either silence the guns and resume the political process, or we will slip back into large-scale conflict and suffering that you have already seen here in Marib.” 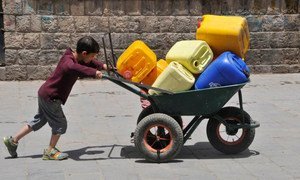 The UN human rights office is calling on authorities in Yemen to revoke death sentences imposed against 35 parliamentarians allegedly for treason charges.