UN News/Daniela Gross
Cordillera Huayhuash in August 2019. The Andes contain 99% of the world's tropical glaciers and 71% are in Peru.

The world’s mountain and glacier regions are facing unprecedented challenges due to climate change, imposing a crippling effect on the people and economies that rely on them, the UN’s weather agency explained on Tuesday, ahead of a summit to address the world’s rapidly-changing water systems.

The earth’s glaciers, snow, permafrost and associated ecosystems, collectively known as the cryosphere, provide drinkable water for half of the world, but as the earth gets warmer, the supply is becoming unpredictable.

The UN’s weather agency which is carefully monitoring the effects of climate change on water supplies, WMO, and partners, kicked off the High Mountain Summit in Geneva on Tuesday. Mountain environments are seeing changes in flash flooding patterns, retreating mountain glaciers, and changes to seasonal runoff, among others.

A quick glance at how reference glaciers have retreated since 1950 #MountainSummit #ClimateChange #mountainsmatter pic.twitter.com/3shjQxurIJ

As a result of these changes on the world’s peaks, freshwater supplies are being impacted, from mountainsides to urban economies, as recognized by the UN  in a recent General Assembly Resolution on Sustainable Mountain Development.

From the Yukon, to the Andes, the mountain cryosphere provides and regulates freshwater resources for around half of the world’s population, WMO explained in the summit concept note, and the retreating ice, is creating major impacts.

The UN’s Intergovernmental Panel on Climate Change (IPCC) outlined these repercussions in a special report published in September, ahead of the three-day mountain summit,  which addresses the growing burden of the changing climate and its strain on the earth’s water systems, from its oceans, to its ice sheets.

In the Hindu Kush Himalayan region, floods alone account for one-third of all natural disasters, which are increasing and leaving one billion people at greater risk of exposure, one expert on the region told summit attendees. Around the world, the human impacts of natural hazards are rising, nearly doubling every decade.

WMO’s high-level dialogue aims to engage decision-makers and local actors to make the most of existing mechanisms to enhance the presence and quality of hydro-meteorological and climate services for disaster risk reduction, and better water resource management.

Those who are mountain-dwellers and know them well, have a unique relationship with nature, therefore, the culture aspect is key when it comes to implementing disaster disk management technologies, in places they’ve never been before.

People who are indigenous to Peru’s Andes region have long seen glacial lake outburst floods (GLOFs) as a fact of life and worshipped the mountain as a God. Building a weather station in a sacred place could stir fear of supernatural consequences among locals, who believe they may be punished by rain or drought, one environmentalist explained.

The nexus between research and decisions which will impact local people, however positive, is therefore, a delicate one, and clearly communicating the benefits of change is essential.

Further, the September IPCC report highlights the importance of locals’ and indigenous knowledge, coupled with scientific understanding, in building successful approaches to helping the earth’s highlands.

In recent years, two neighbouring indigenous populations in the United States, who share a large reservation in the northern Rocky Mountains, rely on glacier meltwater for pasture irrigation, fishery maintenance, and traditional ceremonies, and thus, have sought to install mechanisms for more efficient water use, but were met with land law roadblocks.

Governments must play a major role in supporting adaptation activities, which the High Mountain Summit seeks to promote. In addition, the event, concluding on 31 October, is expected to adopt a Call for Action, identify practical steps for enhancing the cryosphere, and foster interactive dialogue between science, policy, governance, and local actors.

The Summit will be followed by the Santiago Climate Change Conference, featuring the annual 25th session of the Conference of the Parties (COP 25) to the UN Framework Convention on Climate Change (UNFCCC), taking into account the landmark Paris climate accord and UN 2030 Sustainable Development Agenda.

Click below to hear from Coordinating Lead Author of the latest IPCC report on Soundcloud: 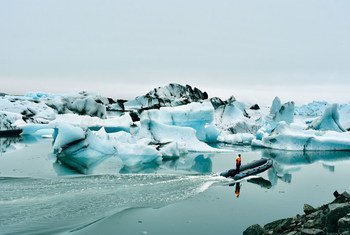