UN Mission in Colombia
UN observers removing the last of more than 8,112 guns carried by the FARC-EP.
4 June 2019
Human Rights

Dimar Torres Arévalo, a demobilised member of the FARC, which battled against Government forces for more than 50 years, was found dead on 22 April outside a National Army camp in North Santander, near the border with Venezuela.

The attack, which the UN experts say is an extrajudicial execution, represents “a risk to the peace process as it does not respect the final agreement that calls for respecting the lives of all ex-combatants who laid down their arms,” they said in a statement, adding that “it is therefore a violation of the guarantees made by Colombia”.

The six independent experts received allegations from members of Torres Arévalo’s community, that Government soldiers of the Ground Operations Battalion No.11 of the II Division had denied knowing the former combatant’s whereabouts. Subsequently, three shovels and a freshly dug grave - allegedly intended for Mr. Arévalo - were found near the body.

He had been one of those included in the formal process of reintegration as part of the implementation of the Final Agreement marking the end of the conflict. The experts contacted Colombian authorities and urged them to protect the rights and freedoms of reintegrated former combatants of FARC-EP and their families as they transition to civilian life.

They also urged fair and impartial investigation and prosecution for killings and acts of aggression, intimidation, harassment or retaliation by security forces as well as armed groups.

Calling on the authorities to “cease inciting violence against demobilised individuals”, they stressed that “it is important for the protection of these individuals and their families that perpetrators are brought to justice.”

They also explained that “ignoring guarantees pledged to former rebel fighters increases the prospect of them deserting the peace and reintegration process and the possibility of them joining dissident groups or taking up arms again to protect themselves”.

Warning of the consequences of disregarding these guarantees, they said it could be “detrimental to peace, development and stability”.

“The Government must take immediate steps to implement the peace accords,” they insisted.

In addition, on Tuesday, the head of the UN Educational, Scientific and Cultural Organization (UNESCO) denounced the killing of documentary film director Mauricio Lezama Rengifo, on 9 May, in La Esmeralda, in the Arauca department, in Colombia. She was killed by unidentified gunmen while conducting interviews for a documentary about victims of the armed conflict in Colombia.

“I condemn violence against journalists and other reporters, whose work, in whatever medium, investigates the world we live in,” said Director-General Audrey Azoulay. “In keeping with its Constitution, UNESCO promotes both press and artistic freedoms, both of which are essential to the free flow of ideas by word and image, and to our understanding of the world.”

♦ Receive daily updates directly in your inbox - Subscribe here to a topic.
♦ Download the UN News app for your iOS or Android devices.
Colombia|human rights 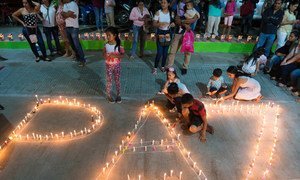 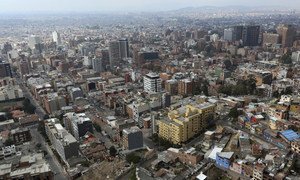