High Commissioner for Human Rights Michelle Bachelet called on Colombia’s Government to take concrete actions to protect the population from the surge in violence inflicted on peasants, indigenous and Afro-Colombian people by non-State armed groups, criminal groups and other armed elements.

"It is the State's duty to be present throughout the country, implementing a whole range of comprehensive public policies, not only to clamp down on those responsible for the violence, but also to provide basic services and safeguard the fundamental rights of the population", Ms. Bachelet said in a statement.

"I call on the Colombian authorities to take stronger and much more effective action to protect the population from this appalling and pervasive violence", she added.

In addition to those 375 deaths recorded in 2020, the UN Verification Mission in Colombia has also documented 244 killings of former FARC fighters since the signing of Colombia’s Peace Agreement in November 2016, which ended Latin America’s longest-running civil war.

The peace agreement specifically requested Colombia’s National Commission on Security Guarantees to develop a public policy to dismantle "the criminal groups that succeeded paramilitary structures and their support networks", and Ms. Bachelet said that remained an urgent task.

"Sadly, violence has been normalized in Colombia after decades of armed conflict, and no one should accept that", Ms. Bachelet said.

OHCHR spokesperson Marta Hurtado said the UN figures only included killings that had been reported to the UN, and the actual number of deaths was likely to be higher, considering the obstacles created by the COVID-19 pandemic.

Ms. Hurtado said the groups suspected of being responsible for the killings were trying to get control of remote areas that lacked government services such as public health and education. Colombia’s government should extend public services to such places, she said.

One of the worst affected groups was the Nasa community in Northern Cauca, which had 66 of its members reportedly killed this year. Five were killed on 5 December, and 24 leaders and authorities of the Nasa people received death threats the same day, Ms. Hurtado said.

Those incidents came two days after the killing of Miguel Tapí Rito, an indigenous leader of the Chocó department, whose death prompted 900 people, mostly women and children, to flee to a nearby town, hoping for protection from Colombian authorities, the OHCHR statement said.

In July this year the top UN official in the country told the Security Council that the killing of former combatants, human rights defenders and community leaders remained the most serious threat to peace since the 2016 peace agreement

♦ Receive daily updates directly in your inbox - Subscribe here to a topic.
♦ Download the UN News app for your iOS or Android devices.
Colombia|human rights|peace agreement 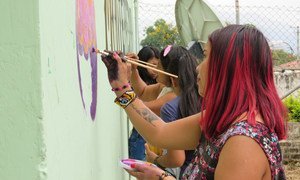 The UN deputy chief has underscored the importance of the full and comprehensive implementation of Colombia's historic 2016 peace agreement, to enable sustainable and resilient communities in the wake of the coronavirus pandemic. 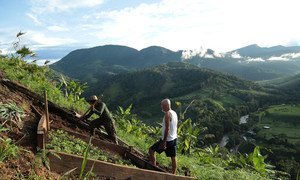