MINUSMA/Harandane Dicko
MINUSMA troops based in Kidal in the extreme north of Mali, ensure the security of the camp, and also the safety of the civilian population.

Mr. Guterres is “deeply saddened at the death of a Nigerian peacekeeper who succumbed to his wounds following the armed attack by unidentified assailants in Timbuktu”, said his spokesperson, Stéphane Dujarric,  in a statement issued that evening.

The UN chief expressed his “heartfelt condolences” to the bereaved family and the Government of Nigeria and “wished a speedy recovery to another Nigerian peacekeeper who was wounded in the same attack”.

He also wished a “swift recovery to three Chadian peacekeepers”, who were wounded when their mine-protected vehicle hit an improvised explosive device in Tessalit, Kidal region.

The Secretary-General recalled that “attacks targeting United Nations peacekeepers may constitute war crimes under international law” and called on the Malian authorities to “take swift action to identify the perpetrators of these attacks and promptly bring them to justice”.

“The Secretary-General reaffirms the solidarity of United Nations with the people and the Government of Mali and its support to their quest for peace and stability”, Mr. Dujarric concluded.

For its part, the Security Council condemned “in the strongest terms” the attacks while also expressing their “deepest condolences and sympathy” to the victim’s family, to Nigeria and to MINUSMA.

In a statement issued on Sunday, the  Security Council members  cited resolutions and stressed that any “involvement in planning, directing, sponsoring or conducting attacks” against MINUSMA peacekeepers “constitutes a basis for sanctions”.

The Security Council reaffirmed that “terrorism in all its forms and manifestations constitutes one of the most serious threats to international peace and security” and underlined that the “perpetrators, organizers, financiers and sponsors of these reprehensible acts of terrorism” be brought to justice.

Stating that those responsible “should be held accountable”, the Council urged all States, in accordance with their obligations under international law and relevant Security Council resolutions, “to cooperate actively with all relevant authorities in this regard".

Any acts of terrorism are criminal and unjustifiable Security Council

“Any acts of terrorism are criminal and unjustifiable, regardless of their motivation, wherever, whenever and by whomsoever committed” they spelled out.

All States must combat “by all means”, threats to international peace and security caused by terrorist acts, the statement continued.
The Security Council said it fully supported Mahamat Saleh Annadif, Special Representative for Mali and Head of MINUSMA, the peacekeeping mission and the other security presences “in Mali and in the Sahel region”.

Expressing concern over the country’s security situation and “the transnational dimension of the terrorist threat in the Sahel region”, the Council urged the nation’s parties to “fully implement the Agreement on Peace and Reconciliation in Mali without further delay”

“The full implementation of the Agreement and the intensification of efforts to overcome asymmetric threats can contribute to improving the security situation across Mali” they said, underlining that the efforts of the Cross-Border Joint Force to counter the activities of terrorist groups and other organized criminal groups will “contribute to create a more secure environment in the Sahel region”.

The Council members further stressed “he importance that MINUSMA has “the necessary capacities to fulfil its mandate and promote the safety and security of the United Nations peacekeepers, pursuant to Security Council resolution 2423 (2018)”.

“These heinous acts” will not undermine the Council’s determination “to continue to support the peace and reconciliation process in Mali” the statement concluded.

Statement attributable to the Spokesman for the Secretary-General - on attacks … 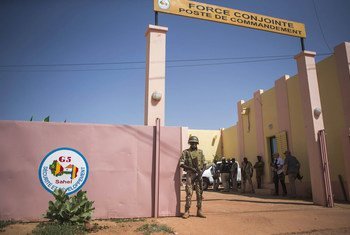