MINUSMA/Harandane Dicko
A G5 headquarters in Mopti in central Mali. (file 2017)
16 May 2019
Peace and Security

Dubbed the ‘G-5 Sahel’ after the group of countries that comprise it (Burkina Faso, Chad, Mali, Mauritania and Niger) the Joint Force, proposed by the African Union and backed by the UN Security Council, aims to bolster coordination to “neutralize” armed groups in the region and strengthen Cooperation on economic development and security.

She said she was particularly encouraged by the resumption of joint force operations in January, noting that the force has carried out four operations since the beginning of the year.

Ms. Keïta considered it essential to continue this momentum.

“I call on the G-5 Sahel Member States to urgently accelerate the full operationalization of the joint force so that it can finally reach its full operational capability,” she said during a briefing alongside the Executive Director of the UN Office on Drugs and Crime (UNODC), Yury Fedotov, Burkina Faso's Minister of Foreign Affairs, Alpha Barry, the High Representative of the African Union for Mali and the Sahel, Pierre Buyoya, and European Union Special Representative for the Sahel, Angel Losada Fernandez.

The situation in Mali and in the wider Sahel remained extremely worrying, said Ms. Keïta, cautioning that while the region faces serious problems – from growing insecurity to the spread of violent extremism across borders – the solution to many of the Sahel’s challenges such as the impact of climate change and drugs and people-smuggling, cannot be solely military.

She said that effective G-5 Sahel operations “will send a strong signal to terrorist groups: their encroachment on the life of the population will no longer be tolerated and will be rejected by the collective determination of the Member States of the region.”

But at the same time, Ms. Keïta said, “a security-driven approach alone will not be sufficient to combat violence in the region in a sustainable manner. It must go hand-in-hand with our collective and coordinated efforts and a broader strategy encompassing poverty reduction, good governance, development and humanitarian assistance and security interventions.”

The UN Integrated Strategy for the Sahel “remains a valid framework for coordinated action and I call on all partners to support its operationalization, in particular for climate adaptation, women and youth empowerment and cross border initiatives for peace,” she said, referring to the 2013 plan endorsed by the Security Council that prioritizes life-saving activities that meet immediate needs, while building the resilience of people and communities as part of a long-term development agenda.

"The time for action is now,” Ms. Keïta said, calling more support from the African Union, the European Union and the Council, and adding that “we all have a shared responsibility for the Sahel and we must each deliver on our part of a promise to help provide much-needed relief and empowerment to the populations [across the region] who need it most.”

UN Photo/Loey Felipe
Yury Fedotov, Executive Director of the UN Office on Drugs and Crime (centre) alongside other officials from the African Union and European Union, addressing Security Council meeting on peace and Security in Africa.

These results were made possible thanks to support from the governments of Germany, Japan, the United States, the Netherlands, Denmark, Norway, Belgium, France and the EU.

“Our G-5 Sahel partners deserve a great deal of credit for their commitment to advance efforts through the Joint Force in a fragile security environment,” but nonetheless, “we must be clear: many daunting challenges remain.”

There are three areas which UNODC said urgently required Member State support to implement the Police Component of the Joint Force: In the field of forensics, where equipment and training for law enforcement officers on crime scene investigation must be provided; support to further promote integrity measures within the Joint Force and national justice systems; and increased support to integrate women in the security structures of the G-5 Member States.

Meanwhile, Mr. Losada said cooperation btw UN and European Union “is excellent” and that the EU fully supports the work being done by MINUSMA, the UN integrated mission in Mali.

“The EU and its member States are determined to continue to build this partnership with the G-5 Sahel countries, it is vital for the security and development of the region. The EU is prepared to maintain its support through 2019 and 2020, upon the condition of greater involvement by the G5 Sahel States in achieving the objectives on the ground,” he said.

“It is also important to remobilize political and financial support of other international partners…This joint effort must be shared and must be based on open and effective dialogue with the G-5 Sahel, and tangible progress on the ground.”

Such momentum, stressed Mr. Losada must be maintained “if we wish the effort to be continued and stepped up. We are counting upon the support of the Security Council, which is indispensable to continuing these efforts, both in political terms, and in terms of the logistical and financial support to the G-5 Sahel and its Joint Force.”

♦ Receive daily updates directly in your inbox - Subscribe here to a topic.
♦ Download the UN News app for your iOS or Android devices.
sahel|security council 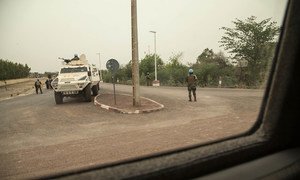