MINUSMA/Harandane Dicko
The Guinean contingent of MINUSMA which is based in Kidal in the extreme north of Mali, ensures the security of the camp, conducts mine action activities and also ensures the safety of the civilian population.
20 January 2019
Peace and Security

The UN Secretary-General, António Guterres, strongly condemned the deadly attack which killed ten peacekeepers from Chad and injured at least 25 others.

“MINUSMA forces responded robustly and a number of assailants were killed,” a statement issued by his Spokesperson read.

The Secretary-General conveyed his “heartfelt condolences to the Government of Chad, and the families and loved ones of the deceased”, and wished a swift recovery to the injured, paying tribute to the dedication and courage of the men and women serving in MINUSMA “at great personal risk and sacrifice”.

A proliferation of armed groups fighting government forces and their allies in the centre and northern areas of Mali following a failed coup six years ago, have made MINUSMA the most dangerous mission to serve in as a UN ‘blue helmet’.

Mr. Guterres called on the Malian authorities, as well as the signatory armed groups to the peace agreement, to “spare no effort” in identifying the perpetrators of this attack so that they can be brought to justice as swiftly as possible.

Recalling that attacks targeting UN peacekeepers may constitute war crimes under international law, he reaffirmed that “such acts will not diminish the resolve of the United Nations to continue supporting the people and Government of Mali in their efforts to build peace and stability in the country.”

The head of the mission, Mahamat Saleh Annadif, strongly condemned the attack as well. “This complex and cowardly attack shows how determined terrorists are to sow chaos,” he said. “This requires a robust, immediate and coordinated response from all the forces to destroy the threat of terrorism in the Sahel.”

“Working closely with its partners, MINUSMA will remain proactive and will not let this barbaric act go unpunished,” he stated.

♦ Receive daily updates directly in your inbox - Subscribe here to a topic.
♦ Download the UN News app for your iOS or Android devices.
mali|MINUSMA|terrorism|sahel 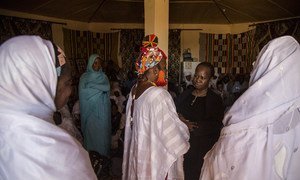