Peacekeeping: A 'great opportunity' to develop professionally and personally

A senior commander from Argentina, who has been deployed to the United Nations peacekeeping mission on the Mediterranean island of Cyprus, has said that serving the UN is a “great opportunity” to develop professionally and personally.

Lieutenant Colonel Jorge Frias Barrera speaks from experience. He is on his second tour of duty to the United Nations Peacekeeping Force in Cyprus (UNFICYP) and plays a key role as the current Deputy Chief of Staff for Operations, in supporting the Force Commander who leads the military component in the mission.

“Serving here is a great opportunity to develop, to meet other professionals, to know a mission that has many challenges and to get to know other cultures and another country. I am proud to serve the UN and my country,” he said.

Currently, a total of 269 peacekeepers from Argentina—246 men and 23 women—including Lieutenant Colonel Barrera who is stationed at the mission’s headquarters in Nicosia, are deployed to UNFICYP.

UNFICYP was mandated by the UN Security Council in 1964 to prevent fighting between the Greek Cypriot and Turkish Cypriot communities on the island and to bring about a return to normal conditions.

I encountered intruders inside the buffer zone and warned them that they were inside the zone without authorization. A shot was fired and it passed directly by me, so fortunately, I was not injured. Lieutenant Colonel Barrera

It is one of the smaller UN peacekeeping missions, where just over 1,000 military, police and civilian peacekeepers, are deployed.

The Argentinian contingent is stationed in what is known as Sector One of the mission within the buffer zone dividing the island, which covers a distance of approximately 90 kilometers from Kokkina village on the western coast of Cyprus to the village of Mammari, west of Nicosia.

Argentinian peacekeepers from Sector One carry out regular foot and vehicle patrols in order to maintain the military status quo and prevent any escalation of tensions between the opposing forces deployed along the buffer zone.

Furthermore, a specialized air unit of Argentinian personnel operates three helicopters to conduct air patrols along the buffer zone and provide logistical support for UNFICYP operations as well as emergency assistance such as medical evacuations.

UNFICYP/Katarina Zahorska
An UNFICYP peacekeeper takes part in a routine patrol along the buffer zone in Cyprus.

While the overall situation in Cyprus remains stable, UNFICYP has observed and reported an increase in the number of violations of the military status quo in the last six months of 2018. Lieutenant Colonel Barrera experienced one such violation during his first deployment to UNFICYP in 1996. "I encountered intruders inside the buffer zone and warned them that they were inside the zone without authorization. A shot was fired and it passed directly by me, so fortunately, I was not injured.”

A total of 16,000 Argentinian military personnel have served with UNFICYP since 1993, staying for six month rotations. Those personnel have come from the Army, the Marine Corps, the Air Force as well as security forces of the Argentinian National Gendarmerie.

Since 1958, Argentina has contributed more than 40,000 military and police personnel to more than 30 UN missions. In recent years, the country collaborated with four missions under the UN flag: Haiti, Cyprus, Western Sahara and the Middle East, and has contributed military observers in Colombia, following the peace agreement in the South American country.

Globally, a total of 26 Argentinian peacekeepers have lost their lives serving the United Nations since 1948.

♦ Receive daily updates directly in your inbox - Subscribe here to a topic.
♦ Download the UN News app for your iOS or Android devices.
Argentina|peacekeeping 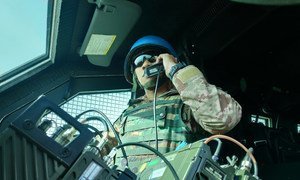 Peacekeepers from Malaysia serving under the United Nations flag in Lebanon face a “a totally new experience” according to the commander of the Malaysian contingent in the country.