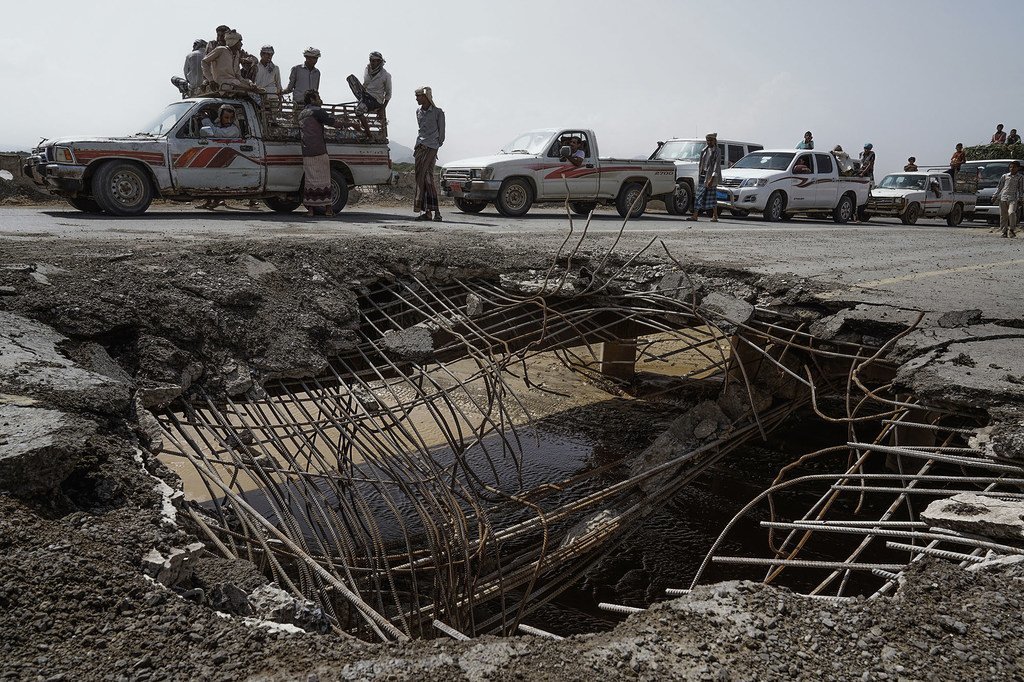 OCHA/Giles Clarke
A bridge damaged by an air strike in Yemen’s Hudaydah governorate (file photo). Over 170 people have been killed and more than 1,700 injured in the region since fighting escalated in June 2018.
14 October 2018
Humanitarian Aid

Condemning an attack on passenger buses in Yemen’s Hudaydah governorate, the top United Nations humanitarian official in the country has called on warring parties “to do everything possible” to protect civilians.

“This is a horrific incident,” Lise Grande, the Humanitarian Coordinator for Yemen, said in a news release on Sunday.

“The UN agencies working in Yemen unequivocally condemn the attack on civilians and extend our deepest condolences to the families of the victims,” she added

Ms. Grande also reiterated that under international humanitarian law, parties to the conflict are obliged to respect the principles of precaution, proportionality and distinction.

Belligerents must do everything possible to protect civilians – not hurt, maim, injure or kill them — UN relief official Lise Grande

“Belligerents must do everything possible to protect civilians – not hurt, maim, injure or kill them,” added the UN official.

At least 15 civilians have been reported killed and 20 others injured when the minibuses they were traveling in were struck in Jabal Ras district in war-ravaged Yemen’s western Hudaydah governorate, on Saturday.

A number of injured have been transported to the towns of Zabid and Bait al Faqiah where they are being treated at hospitals supported by the UN World Health Organization (WHO) and its partners. Other UN agencies are standby to provide whatever other assistance may be needed, noted the news release.

According to humanitarian organizations, some 170 people have been killed and over 1,700 injured in Hudaydah since fighting escalated in June 2018. Furthermore, more than 425,000 people have been forced to flee their homes.

Across Yemen – the world’s worst humanitarian crisis – more than 22 million people, or 75 per cent of the population, need some form of assistance and protection. However, response efforts remain constrained due to limited resources. A $3 billion Humanitarian Response Plan launched by UN and aid partners for 2018 lacks almost a third of the funds it needs.