UNHCR/Markel Redondo
A woman hangs washing out to dry at the Vathy Reception and Identification Centre (RIC) on the island of Samos, Greece. Refugee families are struggling at the reception centres on the island of Samos due to overcrowding, leading to deteriorating conditions.
31 August 2018
Migrants and Refugees

The Office of the UN High Commissioner for Refugees (UNHCR), which issued the appeal on Friday, described the centres as “squalid, inadequate and rapidly deteriorating”.

Levels of overcrowding on some islands are on a par with March 2016, when arrival rates were far higher than they are now.

The majority of those seeking shelter are from Syria, Iraq and Afghanistan, according to the UN agency.

It has warned that hundreds of unaccompanied boys and girls are particularly at risk, along with dozens of pregnant women, newborns and survivors of sexual violence.

More than 3,000 asylum-seekers on the islands have been given permission to move to the mainland, but transfers “have been slow”, UNHCR says, owing to a lack of accommodation and reception facilities.

Thousands of asylum-seekers and migrants are living in squalid, inadequate and rapidly deteriorating conditions on various Greek Islands.

“The situation is reaching boiling point at the Moria RIC on the island of Lesvos,” UNHCR spokesperson Charlie Yaxley said, referring to the Reception and Identification Centres (RIC) used to house new arrivals.

“More than 7,000 asylum-seekers and migrants are crammed into shelters built to accommodate just 2,000 people,” he added. “A quarter of those are children.”

There are similar overcrowding levels on another Greek island, Samos, where some 2,700 mainly Syrian and Iraqi families are staying in a facility that was originally designed to hold around 700 people.

On the islands of Chios and Kos, meanwhile, reception centres are at close to double their intended capacity.

“This is likely to become a serious concern if not addressed before winter sets in,” Mr. Yaxley told journalists, before warning of other urgent needs.

“We are particularly concerned about woefully inadequate sanitary facilities, fighting amongst frustrated communities, rising levels of sexual harassment and assaults and the increasing need for medical and psycho-social care,” he said, noting that increasing numbers of people - “including children” - have been displaying signs of mental health problems.

So far this month, around 800 asylum-seekers have been moved to the Greece’s mainland.

But this has failed to ease the pressure on the island reception facilities, as the number of arrivals has increased to an average of 114 per day, up from 83 in July.

To help reduce delays in transporting vulnerable people to the Greek mainland, UNHCR will continue to assist in the process next month.

“We do encourage the Greek authorities, who have received European funding for this situation, to address these challenges and to accelerate the procedure and measures to decongest the island as soon as possible,” Mr. Yaxley said.

Latest data from UNHCR indicates that so far this year, around 19,000 vulnerable people have reached the Greek islands from Turkey. In 2015, the number was more than 850,000.

“It’s a very manageable situation, it’s a question of political will,” Mr. Yaxley told journalists in Geneva, in an appeal for European Union countries to show solidarity with those in need of international protection.

♦ Receive daily updates directly in your inbox - Subscribe here to a topic.
♦ Download the UN News app for your iOS or Android devices.
Migrants and refugees|greece 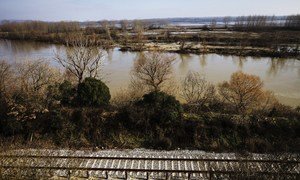 Some 2,900 mostly Syrian and Iraqi families have arrived in Evros this month, with eight others losing their lives trying to cross the Evros River from Turkey – prompting the United Nations refugee agency to call on the Greek Government to improve the conditions at its reception area.