UNHCR/Achilleas Zavallis
Train tracks alongside the river Evros land crossing from Turkey to Greece. At least eight people have died attempting to make the crossing since the start of 2018. The areas only reception centre in filled to capacity and struggling to cope with registration.

Some 2,900 mostly Syrian and Iraqi families have arrived in Evros this month, with eight others losing their lives trying to cross the Evros River from Turkey – prompting the United Nations refugee agency to call on the Greek Government to improve the conditions at its reception area.

Located in the north-eastern part of Greece, the increase in new arrivals is placing a strain on the Fylakio Reception and Identification Centre, the only one in Evros, which is filled beyond its 240-person capacity – including 120 unaccompanied and separated children.

“With the Reception and Identification Centre overwhelmed, and struggling to conduct timely registration and identification, or to provide services such as medical and psycho-social care and interpretation, the authorities initially place people, including many children, in inappropriate police detention facilities in the area while they wait for places at the centre to open up,” Charlie Yaxley, spokesperson for the UN High Commissioner for Refugees (UNHCR) office told a regular press briefing in Geneva on Friday.

He went on to inform the press that some have been held in police detention for more than three months with dismal conditions are dismal and limited services.

“A UNHCR visit found families in one facility sleeping on the floor beside a row of cells,” he elaborated, adding that in a separate police facility, only one doctor and four nurses were available for more than 500 people – including pregnant women, very young children and people in need of medical and psycho-social care.

While welcoming the recent release of more than 2,500 people from detention, UNHCR expressed concern that they are being done without vulnerability screening and information on asylum and other options.

“Their situation must be urgently addressed to enable access to care and asylum procedures,” stressed Mr. Yaxley.

The spokesperson acknowledged the police and the Fylakio Centre were trying to address the challenges, adding that with increasingly stretched resources, the situation has become untenable.

He proposed a number of measures to stabilize the situation, such as immediately setting up reception and identification mobile units and transferring unaccompanied children to safe accommodation and families in detention to safe shelters.

“UNHCR will continue to assist the Greek authorities through the provision of technical and material support, including blankets, clothing, hygiene items, solar-powered lamps and other non-food items,” he concluded. 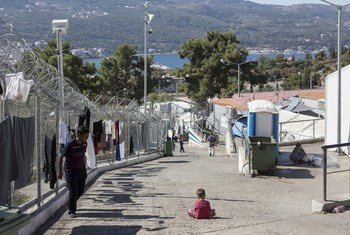