Yorgos Kyvernitis
Man sits at the overcrowded reception centre in Moria on the Greek island of Lesvos.
6 November 2018
Migrants and Refugees

Authorities in Greece must take urgent steps to address the “abhorrent” humanitarian situation for around 11,000 asylum-seekers on the islands of Samos and Lesvos, the UN refugee agency warned on Tuesday.

With winter approaching and more refugees arriving, the agency is reiterating its call for emergency measures to alleviate the strain on local shelters.

In Samos, the Reception and Identification Centre (RIC) currently hosts around 4,000 people, six times its capacity of 650. Some 2,000 asylum-seekers on Lesvos have resorted to sheltering in a nearby olive grove as the island’s RIC is overcrowding with 6,500 people – three times its design.

New arrivals have been forced to buy flimsy tents from local stores, which offer little protection from cold weather without basic services like electricity, running water or toilets, according to the Office of the UN High Commissioner for Human Rights (UNHCR).

The number of broken facilities has resulted in open sewage near people’s tents, and a rat population that is thriving amid uncollected waste.

Urging that transfers to the mainland be speeded up for the 4,000 people eligible to go, the agency noted that though the Government has planned an additional 6,000 mainland accommodations, more than 11,000 people have arrived on the islands in the last three months – outpacing departures.

Many come in need of urgent medical assistance, shelter and information, but the reception services and procedures are falling short of demands. A single doctor per shift provides medical attention to the entire population, leaving less urgent cases unattended, the agency reported.

Deteriorating weather is likely to exacerbate the need for shelter, already at a premium, as asylum-seekers will more urgently need space within RIC borders to avoid freezing temperatures, like the ones that killed a number of refugees and migrants last winter.

Conditions on neighboring islands like Chios and Kos are only marginally better, with centres at double their capacity. Only at Lepida RIC, on Leros Island, is the facility working within capacity.

UNHCR has assisted 5,300 asylum-seekers transfer to the mainland since the beginning of September, and is providing some 400 containers to boost Greece’s hosting capacity, as well as delivering some 19,000 relief items to the islands, including winter kits, sleeping bags and hygiene items.

The agency is calling on the European Commission and Member States to continue preparations for emergency support and relocation measures at the request of the Greek Government.

♦ Receive daily updates directly in your inbox - Subscribe here to a topic.
♦ Download the UN News app for your iOS or Android devices.
refugees|greece 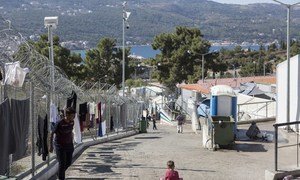 Overcrowding in Greek island reception centres for refugees and migrants has made conditions for children there increasingly “dire and dangerous”, the United Nations Children’s Fund (UNICEF) said on Friday, warning that “severe emotional distress” affects many and that self-harm is a “possibility”. 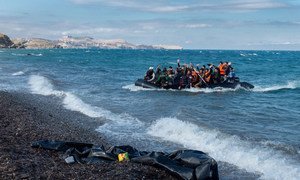