Top United Nations officials have underscored the importance of security sector reform, which they say could mean the difference between peace and conflict, and between life and death.

“Security sector reform is key to sustaining peace,” Miroslav Lajčák, the President of the General Assembly, said Monday at a high-level roundtable on the subject.

“Security actors have many powerful tools at their disposal. This goes beyond guns and handcuffs. Instead, they hold the tools which can pull societies back from the brink of conflict.”

Mr. Lajčák, however, added that their roles can also be negative. In some cases they can be politicized; widen divisions, stoke fears and tensions; and they can abuse their positions, to target and persecute one group or one community.

He went on to elaborate that with effectiveness, accountability, professionalism as well as proper governance, security sector is more likely to promote sustaining peace.

To make sure that security sectors drive peace, the President of the General Assembly underscored that the security sector reform process needs to have national ownership as well as regional engagement.

Equally important is the participation of women, he added, noting also the importance of sufficient resources, and coherence and coordination among the actors involved.

Today’s event comes on the eve of the two-day High-Level Meeting on Peacebuilding and Sustaining Peace that the Assembly President will convene on Tuesday and Wednesday to assess efforts undertaken and opportunities to strengthen the UN’s work in this area.

At its heart SSR is about ensuring safety and enabling women, men and children to live their lives free from fear — Deputy Secretary-General Amina J. Mohammed

Speaking alongside Mr. Lajčák, Amina J. Mohammed, the UN Deputy Secretary-General, also underscored the importance of security sector reform for delivering on the 2030 Agenda for Sustainable Development as well as other global commitments

Security sector reform figures prominently in the Sustainable Development Goals (SDGs), and in particular Goal 16 on promoting peaceful and inclusive societies and effective, accountable and inclusive institutions. Strengthening of the security sector is also part of Goal 2 of the New Deal for Engagement in Fragile States.

“In short, security sector reform is a core element of prevention and sustaining peace agenda,” said Ms. Mohammed, noting that in developing countries and countries emerging from conflict, it is both essential as well as a difficult process to manage.

“At its heart SSR is about ensuring safety and enabling women, men and children to live their lives free from fear,” she underscored.

In her remarks, the UN deputy chief also said that addressing challenges related to security sector reform during peace processes contributes to stabilization efforts, as well as highlighted its importance as a preventive measure.

♦ Receive daily updates directly in your inbox - Subscribe here to a topic.
♦ Download the UN News app for your iOS or Android devices.
Security sector reform|peacebuilding 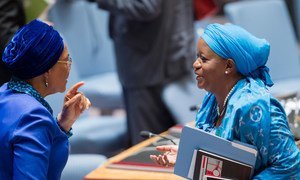