United Nations Deputy Secretary-General Jan Eliasson has urged greater national ownership and more funding towards security sector reform as part of an effort to strengthen the links between peace and security, development, and human rights.

The UN can help to achieve this through its missions and country teams on the ground, the Peacebuilding Commission, and the inter-agency Security Sector Reform Task Force, he added.

In 2008, the 15-member body referred to security sector reform 14 times in its resolutions, while by 2012 the figure jumped to 37 references.

Mr. Eliasson also noted the importance of expanding partnerships, particularly between the UN and the African Union, to build capacity in Africa.

He also stressed the importance of matching expectations and mandates with resources, saying that good governance must guide how resources are mobilized and allocated on security sector reform.

On civilian capacity, the UN-Security Sector Reform Roster of Experts provides a global resource, he noted.

“We need to strengthen this tool even more,” said Mr. Eliasson, urging Member States to make use of the Security Sector Reform Roster and to put forward qualified candidates.

♦ Receive daily updates directly in your inbox - Subscribe here to a topic.
♦ Download the UN News app for your iOS or Android devices.
Security sector reform 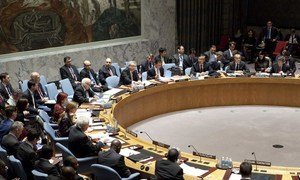 Seriously concerned by the deteriorating security situation and widespread human rights abuses in the Central African Republic (CAR), the Security Council today “reinforced and updated” the United Nations peacebuilding office in the country, while also calling for a political resolution to the conflict.