Photo: Moa Haeggblom
United Nations Secretary-General António Guterres and the Prime Minister of Sweden, Stefan Löfven, at the start of the Secretary-General’s retreat for the UN Security Council in the country.
23 April 2018
Peace and Security

The unity within the Security Council played an essential role in creating the positive momentum that led to a decision by the Democratic People’s Republic of Korea (DPRK) to suspend nuclear tests and launches of intercontinental ballistic missiles, the United Nations chief said Monday, noting however that the 15-member body has so far failed to achieve such unity to tackle the Syrian crisis.

“I have no doubt that if we are today on track… for a peaceful denuclearization of the Korean Peninsula, that is due to a number of reasons,” Secretary-General António Guterres said at a press conference in Stockholm, following a meeting with Sweden’s Prime Minister, Stefan Löfven.

“I would say the most important of those reasons is the unity of the Security Council that was able to come together and to have a very strong and meaningful set of sanctions that I believe had a very important impact, and to a certain extent made North Korea realize that it was necessary to come forward, to enter into dialogue with the international community, and especially with both the Republic of Korea and the United States of America,” he added.

He also cited the important role played by the United States, China and other countries.

Mr. Guterres was in Sweden for his annual retreat with the Security Council, which was held this year at Backåkra, the private estate of Dag Hammarskjöld, the late Swedish diplomat and the UN’s second Secretary-General.

The Council members have used this retreat, normally held outside its chambers, as an opportunity to reflect on larger themes relevant to the work of the Council and the UN system with the Secretary-General and senior members of the Secretariat.

To questions on Syria, Mr. Guterres said that “unfortunately […], the unity of the Security Council has not existed.”

But at the retreat, there was “a unanimous recognition” of the need for a political solution to be achieved through intra-Syrian dialogue with UN facilitation, in line with Council resolution 2254, as well as “a strong commitment” to securing access to deliver humanitarian aid to the Syrian people in need, he said.

On questions about a proposal to create a mechanism to determine who is responsible for chemical attacks in Syria, Mr. Guterres explained that the report produced by the Joint Investigation Mechanism (JIM) that had existed exactly for that purpose was contested by some countries, namely by Russia, and as a result, the mandate of JIM was not renewed.

And after that, different proposals have been put forward to create a successor mechanism but have not been accepted.

“And this is the impasse in which we are, and this impasse is extremely negative and dangerous,” he said, adding that effort was made at the retreat “not to discuss what the solution is, but to try and really create an environment in which countries would understand that we need to overcome this impasse.”

The UN chief said that there was a recognition that such an independent and impartial mechanism is necessary, and “this was underlined by all, including by Russia.”

Describing Sweden’s role as “a pillar of multilateralism” and a “bridge builder” in today’s divided world, Mr. Guterres also acknowledged the Scandinavian country’s contributions to peace and security, humanitarian aid, development and the combat against climate change.

♦ Receive daily updates directly in your inbox - Subscribe here to a topic.
♦ Download the UN News app for your iOS or Android devices.
DPRK|security council 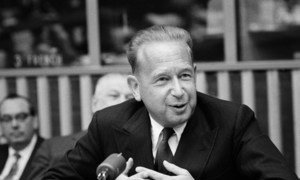 Guterres hails predecessor Dag Hammarskjöld as ‘my reference and my inspiration’

Secretary-General António Guterres on Sunday described his predecessor Dag Hammarskjöld as his “fundamental inspiration,” who should be regarded as the “central reference” point for the whole United Nations ideal today.