UN Photo/Violaine Martin
Staffan de Mistura, United Nations Special Envoy for Syria briefs the press on the last day of the 8th round of the Intra-Syrian talks, Geneva. 14 December 2017.

A renewed United Nations-led diplomatic push is under way for a “meaningful relaunch” of intra-Syrian talks by the Special Envoy for Syria, Staffan de Mistura, his office has announced.

In a statement released on Wednesday, the veteran negotiator is said to be engaged in “high-level consultations […] with the aim of proactively ascertaining the options” for kick-starting the UN-facilitated political process as called for in Security Council resolution 2254 (2015).

Agreed by the 15-member body in 2015, that text calls for free and fair elections for all Syrians and a newly-drafted constitution, as the basis for a Syrian-led, Syrian owned process to end the conflict.

More than seven years of war there have claimed hundreds of thousands of lives, displaced millions and levelled entire cities.

Since January 2016, the Special Envoy has conducted several rounds of negotiations between the warring Syrian parties, the last of which was held in Geneva in December 2017, followed by Vienna talks in late January.

So far this week, Mr. de Mistura has met foreign ministers from several countries participating in the League of Arab States summit in Saudi Arabia.

He was due to hold discussions with senior officials in Turkey on Wednesday, before heading to Russia and Iran for more high-level meetings, according to his team.

Mr. de Mistura is also expected to consult European ministers and senior representatives from the United States at a conference in support of Syria and the region, including bolstering the UN-led political process, taking place in Brussels next week.

The statement by the Office of the Special Envoy follows a warning by the UN Secretary-General last weekend that tensions risk escalating beyond Syria.

António Guterres’ call came in response to air strikes by the United States, France and the United Kingdom, that followed an alleged chemical weapons attack on opposition-held territory outside the capital Damascus 11 days ago.

Earlier today, the Organization for the Prohibition of Chemical Weapons (OPCW) reported that a UN-led security team sent to assess the sites of the suspected attacks and prepare for the arrival of OPCW inspectors came under small arms fire and an explosive was detonated.

“At present, we do not know when the [Fact-finding Mission] team can be deployed to Douma,” OPCW chief Ahmet Üzümcü said. The team is to look into the alleged use of toxic chemicals, reportedly chlorine, at the sites, which reportedly left dozens dead.

There must be justice for victims of crimes in Syria, says head of UN body building cases for prosecution 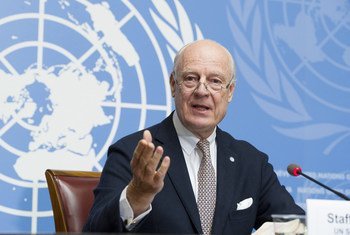 UN ‘will not give up’ on push for ceasefire, says Syria envoy

The United Nations mediator for the Syrian conflict on Thursday said the world body has not given up on the implementation of a recent Security Council resolution demanding a 30-day ceasefire across the war-ravaged country.