UN ‘will not give up’ on push for ceasefire, says Syria envoy

The United Nations mediator for the Syrian conflict on Thursday said the world body has not given up on the implementation of a recent Security Council resolution demanding a 30-day ceasefire across the war-ravaged country.

“We cannot afford the luxury of giving up, so any type of feeling that the UN is frustrated –forget it, we are not frustrated, we are determined because this otherwise becomes the copycat of Aleppo, and we saw it already happening,” Special Envoy Staffan de Mistura told reporters in Geneva, referring to the situation in east Ghouta, where UN Secretary-General António Guterres said earlier some 400,000 people are living “in hell on earth.”

Mr. de Mistura called on both parties to the conflict to stop shelling each other’s areas and to allow humanitarian convoys to reach east Ghouta, stressing that the priority needs to be stopping the suffering and the tragedy of the civilians there and elsewhere.

“The UN here has not and will not give up in asking for the full implementation of (Security Council resolution) 2401. And we will continue asking until we are red in the face, blue in the face, for both side,” he declared, emphasizing that the world does not want to see “[another] Aleppo,” referring to another war-battered Syrian enclave, which saw massive shelling in 2016.

Jan Egeland, Special Adviser to the UN Special Envoy, said east Ghouta is “the place where the violence is at its worst,” and called on Russia, the United States and countries with influence on the ground to help the UN dispatch several convoys per weeks to reach all places in east Ghouta, get more than 1,000 priority medical cases evacuated from there, and also to evacuate civilians out of the conflict zone.

“All of this should be possible, if the Security Council resolution became a reality,” he said, adding that since the adoption of the resolution, the situation has not gotten better, it got worse.

Mr. Egeland said convoys may now be able to go to eastern Ghouta in the next few days and 45 trucks are ready to go to Rukban.

For a full transcript of a joint press stakeout by Mr. de Mistura and Mr. Egeland, here.

♦ Receive daily updates directly in your inbox - Subscribe here to a topic.
♦ Download the UN News app for your iOS or Android devices.
syria|East Ghouta 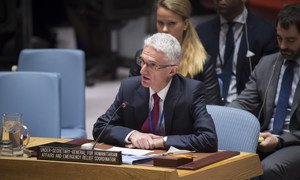 Despite the Security Council’s demand for a ceasefire throughout Syria, violence continues to plague the war-ravaged country, worsening the humanitarian situation and the suffering of its people, top United Nations political and relief officials said Wednesday, calling on all parties to the conflict to “fulfil their obligations to end the fighting.”