UN Photo/Eskinder Debebe
Izumi Nakamitsu, Under-Secretary-General and High Representative of the UN Office for Disarmament Affairs addresses the Security Council meeting on the Salisbury incident in the United Kingdom.

A technical team sent by the Organisation for the Prohibition of Chemical Weapons (OPCW) to the site of an alleged chemical weapons attack in the United Kingdom has identified toxic agents consistent with the UK’s initial investigation, the top United Nations disarmament official told the Security Council on Wednesday.

“[The OPCW] Technical Assistance Visit team has noted that the toxic chemical in question was of high purity,” said Izumi Nakamitsu, the UN High Representative for Disarmament Affairs.

The statement from the OPCW does not specifically name the substance, but it says technical experts confirmed the findings of the UK “relating to the identity of the toxic chemical that was used in Salisbury and severely injured three people.”

The UK has said the chemical in question is the nerve agent Novichok, and that it is “highly likely” that Russia was behind its use in the 4 March incident that seriously injured Sergei Skripal and his daughter, Yulia, and one other person – a police official – in the British town of Salisbury.

Russia has firmly denied the charge.

An OPCW expert team was deployed to the UK at the country’s request seeking technical assistance in identifying the nature of the toxic chemical reportedly used.

OPCW’s report on its finding was submitted to the UK, and at the country’s request, to the States Party to the Convention on Chemical Weapons on 12 April. A public summary of the report can be found on the OPCW website.

At today’s debate, the third the third time the Council has met on the issue, Karen Pierce, the Permanent Representative of the UK to the UN,  acknowledged that Mr. Skripal was a former intelligence officer convicted of espionage in 2006, likely making him a target of Russia.

She also said “there is no plausible alternative explanation than Russian State responsibility for what happened in Salisbury.”

UN Photo/Eskinder Debebe
Ambassador Vassily Nebenzia of the Russian Federation addresses the Security Council meeting on the Salisbury incident in the United Kingdom.

Vassily Alekseevich Nebenzia, the Permanent Representative of Russia to the UN, dismissed the charges as "baseless" and said the announced findings were "a red herring." He citied a lack of transparency by UK, stating “the British barred [OPCW] experts from even mentioning the type of technical assistance requested and from naming the toxic chemical [...] identified.”

He added that the UK instead had that information placed in the classified part of the OPCW report, which cannot be discussed in an open meeting of the Security Council.

The OPCW is the implementing body of the Chemical Weapons Convention (CWC), which came into force in 1997 and outlaws the production, stockpiling, and use of chemical weapons and their precursors. 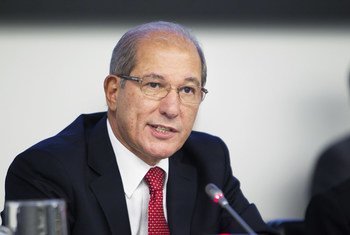