UNICEF/Rich
Firearms laid down by child soldiers associated with armed groups in South Sudan. The formal discharge ceremony saw the release of 207 child soldiers, some of whom are in the background.
18 April 2018
Peace and Security

Two hundred and seven child soldiers have been released by armed groups in South Sudan, part of a series of planned discharges that should see nearly 1,000 children return home over the coming months.

The move, facilitated by United Nations Children’s Fund (UNICEF), follows the release of 300 children by armed groups in early February.

“No child should ever have to pick up a weapon and fight” said Mahimbo Mdoe, the head of UNICEF programmes in the country.

“For every child released, today marks the start of a new life,” he said. “We are proud to support these children as they return to their families and start to build a brighter future.”

But officials also noted that thousands more children remain in the hands of armed groups in South Sudan, in violation of international law.

The children will now undergo medical screenings and receive counselling and psychosocial support as part of the reintegration programme, said UNICEF. Once home, they will also have access to vocational training as well as age-specific education services in schools and accelerated learning centres.

Their families will also be provided with three months’ worth of food assistance to support reintegration.

The children, scarred by what they were made to do in the armed groups and what they saw, were happy to be going home.

“They [the armed group] found us on the way when we were going to the garden. They killed my father and kidnapped us…” said a 16-year-old, recalling hardship and torture for not being able to cook and clean properly.

Another child, a 17-year-old, said that they were made to loot and witness “terrible things” that traumatized them.

“I am happy to come back home,” said the child.

Families, too, were ecstatic.

“I am so happy with the Government and those who brought peace to Yambio because today my three children are going to be released to stay with me at home […] I am grateful to UNICEF and also those who made it possible for the release of the children,” said a mother.

However, despite this release, and the one before it, there are still about19,000 children in use by armed forces and groups in South Sudan. And with conflict lingering in the world’s youngest nation, the risk that children will be used in fighting remains.

“So long as the recruitment and use of children by armed groups continues, these groups fail on their commitment to uphold the rights of children under international law,” underscored UNICEF.

As peace talks resume, the UN agency has called on all parties to the conflict to end the use of children and to release all children in their ranks.

Since gaining independence in 2011, South Sudan has spent much of its short life mired in conflict, as what began as a political face-off between President Salva Kiir and former Vice-President Riek Machar erupted into full-blown war late in 2013. 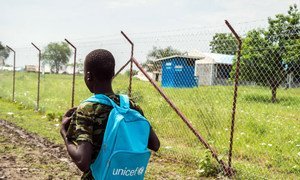