UN Photo/Harandane Dicko
MINUSMA peacekeepers patrolling the village of Bara in northeastern Mali. It is one of the most dangerous UN peacekeeping missions.

As the United Nations continues to send peacekeepers to difficult or war-torn environments like Mali and the Democratic Republic of the Congo, those ‘blue helmets’ will need more and better coordinated support among the actors who authorize and deploy them, Secretary-General António Guterres said on Wednesday.

“UN peacekeepers are often under-equipped, under-prepared and unready [and] there are gaps in command and control, in culture, in equipment and in training,” Mr. Guterres told a Security Council debate on improving UN peacekeeping operations.

“Our peacekeepers are vulnerable, and they are targeted for attack,” he added.

Last year, 59 peacekeepers lost their lives as a result of malicious act – highest number ever and a sharp increase over the year before when the figure was 34.

Calling UN peacekeeping operations “a remarkable enterprise of multilateralism and international solidarity,” the UN chief underscored that they nevertheless also suffer as a result of unrealistic demands, and as a result, both lives and credibility are being lost.

“A peacekeeping operation is not an army, or a counter-terrorist force, or a humanitarian agency. It is a tool to create the space for a nationally-owned political solution,” emphasized the Secretary-General.

Please put an end to mandates that look like Christmas trees. Christmas is over, and [a UN mission] cannot possibly implement 209 mandated tasks — Secretary-General Guterres

“Put simply, peace operations cannot succeed if they are deployed instead of a political solution, rather than in support of one.”

He cited the need to concentrate on three key areas: refocusing peacekeeping with realistic expectations; make missions stronger and safer; and mobilize greater support for political solutions and for well-structured, well-equipped, well-trained forces.

“These efforts are critical – but action by the Secretariat alone is not enough […] our chances of success increase dramatically when we work together with Member States and share burdens, risks and responsibilities,” added Mr. Guterres.

“We urgently need a quantum leap in collective engagement,” he said, announcing the launch of a the Action for Peacekeeping initiative which will mobilize all partners and stakeholders to support peacekeeping efforts.

“As peacekeeping marks its 70th anniversary, I hope we can develop a set of mutually-agreed principles and commitments to create peacekeeping operations fit for the future,” he said.

The high-level open debate was convened by the Netherlands in its capacity as the President of the Security Council for the month of March. The meeting was chaired by the country’s Prime Minister, Mark Rutte.

INTERVIEW: ‘I want to contribute to the service of humanity,’ says first-time UN peacekeeper from Indonesia 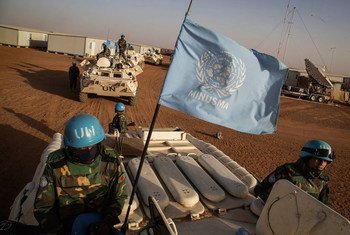