“The Secretary-General recalls that attacks targeting United Nations peacekeepers may constitute war crimes under international law and that the perpetrators must be apprehended and prosecuted,” said UN spokesman Stephane Dujarric. Mr. Dujarric.

“The Secretary-General conveys his condolences to the Governments of Bangladesh and Mali and his profound sympathies to the families and loved ones of the victims,” he continued, adding that Mr. Guterres wished a swift recovery to the injured.

The Secretary-General pointed out that this incident came one day after six members of the Malian armed forces died from another improvised explosive device attack in central Mali.

“These cowardly acts will not deter MINUSMA’s [UN Multidimensional Integrated Stabilization Mission in Mali] determination to support the Malian authorities in their efforts to protect civilians and accompany the Malian people in their quest for peace and stability,” the statement concluded.

At the same time, the Security Council issued a press statement condemning the attack against the MINUSMA convoy “in the strongest term,” detailing that it took place on the axis between Boni and Douentza.

The Council members also expressed their deepest condolences and sympathy to the victims’ families, Bangladeshi Government and MINUSMA and wished a speedy and full recovery to those who were injured.

Underlining that “attacks targeting peacekeepers may constitute war crimes under international law,” they paid tribute to the peacekeepers who risk their lives and called on the Government to “swiftly investigate the attack and bring the perpetrators to justice.”

They stressed that involvement in planning, directing, sponsoring or conducting attacks against MINUSMA peacekeepers constitute a basis for sanctions designations pursuant to Security Council resolutions.

They also stressed that those responsible for the killings should be held accountable, and urged all States, in accordance with their obligations under international law and relevant Security Council resolutions, to “cooperate actively with all relevant authorities” in this regard.

The members expressed their concern about Mali’s security situation and the transnational dimension of the terrorist threat in the Sahel region, urging the Malian parties to implement the Agreement for Peace and Reconciliation without further delay – noting that its full implementation and the intensification of efforts to overcome asymmetric threats can contribute to improving the security situation across the country.

Finally, the Council further spotlighted the importance that MINUSMA have the necessary capacities, including combat convoy companies, to fulfil its mandate and promote the safety and security of the UN peacekeepers. 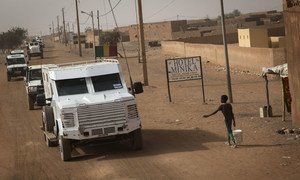 Four United Nations peacekeepers and a member of the Malian armed forces were killed and 21 others were wounded on Friday in what Secretary-General António Guterres called “outrageous” attacks against the UN mission in the country.