UN Photo/Sylvain Liecht
Force Intervention Brigade troops from the UN Organization Stabilization Mission in the Democratic Republic of the Congo (MONUSCO) on patrol with soldiers from the Armed Forces of the DRCongo (FARDC).
22 January 2018
Peace and Security

“Unfortunately, hostile forces do not understand a language other than force,” warns the report, titled Improving Security of United Nations Peacekeepers, arguing that projecting strength is more secure for uniformed and civilian personnel than risk-averse approaches.

Since 1948, more than 3,500 personnel have lost their lives serving in UN peace operations with 943 due to acts of violence. Since 2013, casualties have spiked, with 195 deaths in violent attacks, more than during any other 5-year period in history.

It was in this context that, in November 2017, UN Secretary-General António Guterres appointed Lieutenant General (Retired) Carlos Alberto dos Santos Cruz of Brazil to lead a high-level review to identify why the UN has had so many casualties caused by acts of violence in recent years, and what should be done to reduce these casualties.

Two other authors are William R. Phillips, a retired United States Army Colonel, and former Mission Chief of Staff of the UN Multidimensional Integrated Stabilization Mission in Mali (MINUSMA), and Salvator Cusimano, the Special Assistant to the Director, Africa II Division of the Office of Operations in the United Nations Department of Peacekeeping Operations.

The report does not address the issue of mandates, but instead confines its conclusions to operational issues in missions in those countries.

The report, which was submitted to the Secretary-General, states that with the influx of armed groups, extremists, organized crime, and other criminal elements and threats, the blue helmet and UN flag no longer offer ‘natural’ protection to peacekeepers.

The review team identified four broad areas where the UN and Member States must take actions to reduce fatalities.

These include (1) changing mindsets so that personnel are aware of the risks and empowered to take the initiative to deter, prevent, and respond to attacks; (2) improving capacities so that the mission and personnel are equipped and trained to operate in high-threat environments; (3) achieving a “threat sensitive mission footprint” that is aligned with mission mandates and limits the exposure of the mission to threat; and (4) enhancing accountability to ensure that those able to take actions to prevent fatalities and injuries live up to their responsibilities.

The UN Departments of Peacekeeping Operations and of Field Support have developed an action plan to implement the report’s recommendations, according to a note to correspondents issued by the Office of the Spokesperson for the UN Secretary-General.

The Departments have also established an implementation support team led by two senior officials, which will coordinate and monitor implementation of these measures at Headquarters and provide support to field missions.

AUDIO: Retired Lieutenant General Carlos Alberto dos Santos Cruz of Brazil, the lead author of a new independent report aimed at improving the security of peacekeepers, talks to UN News about what’s needed to make sure ‘blue helmets’ get better training, access to more technology and have greater freedom to respond to the threats.

♦ Receive daily updates directly in your inbox - Subscribe here to a topic.
♦ Download the UN News app for your iOS or Android devices.
peacekeeper 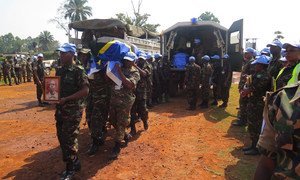 The United Nations is launching a special investigation into attacks on peacekeepers in restive eastern Democratic Republic of the Congo (DRC), one month after 15 'blue helmets' were killed and dozens wounded in the deadliest single assault on a UN mission in nearly a quarter century.