Speaking of “the true cost of peacekeeping”, the UN chief called for a moment of silence for those who “paid the ultimate price” to protect others and “to give war-torn countries a chance for peace and hope”.

The pursuit of peace and progress, with its trials and its errors, its successes and its setbacks, can never be relaxed and never abandoned –Secretary-General Hammarskjöld

“Today, in 14 missions around the world, our peacekeepers serve heroically to preserve peace and stability”, he said, adding that they also “face grave threats”.

He noted that UN missions in Mali, South Sudan, the Central African Republic, Lebanon and the Democratic Republic of the Congo “are among the most dangerous that we have ever undertaken”, saying that “last year we lost 98 military, police and civilian peacekeepers from 36 countries”.

“We ask much of our peacekeepers”, Mr. Guterres said. “In return, we must continue to do all we can to ensure they are as safe as possible”.

“Today, we honour the memory” of the peacekeepers who did not return home, and “recommit ourselves to carrying forward their mission for a better future”.

After laying a wreath to honor fallen Peacekeepers, @antonioguterres reminds the world of the sacrifices of the men and women who serve under the UN flag. Remarks: https://t.co/51TSCY6ryY #PKDay #A4P @UNPeacekeeping pic.twitter.com/7QXHSSoTnM

“Fifty-eight years ago, Secretary-General Dag Hammarskjöld died in a plane crash in the Congo while trying to broker a peace agreement to end the conflict in the country”, said Mr. Guterres, calling the former UN chief “a tireless and fearless champion of peace” who took “robust action when needed”.

“Hailing from different backgrounds, our fallen heroes were united in their efforts to help the UN attain its most important objective – to save further generations from the scourge of war”, said Mr. Guterres. “The medal we posthumously honour them with, bears the name of Secretary-General Hammarskjöld”.

It is also inscribed with the fallen hero’s name, “forever linking them in our hearts and in our memories”, said the UN chief.

Mr. Guterres quoted Secretary-General Hammarskjöld in saying: “The pursuit of peace and progress, with its trials and its errors, its successes and its setbacks, can never be relaxed and never abandoned.”

“Today, as we honour our fallen colleagues with the Dag Hammarskjöld medal, let us also honour them by living up to his call to never abandon the pursuit of peace”, he stressed.

“I offer my highest tribute to those we remember here today, and my sincerest condolences to their loved ones left behind”, he concluded, asking for a moment of silence.

In a special event as part of the commemorations, the UN chief paid tribute to the late Private Chancy Chitete of Malawi, who was hit by enemy fire while protecting and administering lifesaving first aid to his wounded Tanzanian comrade, Corporal Omary.

Private Chitete became only the second winner of the UN’s highest peacekeeping award, the “Captain Mbaye Diagne Medal for Exceptional Courage” which was established in 2014 for uniformed and civilian personnel who meet the criteria, and named after the late UN peacekeeper Captain Diagne - the first posthumous recipient of the award - who saved hundreds of lives in Rwanda in 1994, before being killed.

“The world does not have many true heroes”, said the UN chief, but Private Chitete, who was serving with the UN Stabilization Mission in the Democratic Republic of the Congo (MONUSCO), was “indeed one of them”.

In November last year, while conducting an operation to stop armed attacks which were disrupting the Ebola response in local towns, peacekeepers came under heavy fire. As bullets were flying, Private Chitete dragged Corporal Omary back to an area “of greater safety”, Mr. Guterres recounted. “Both were evacuated for medical treatment. Corporal Omary survived.  Private Chitete did not”.

“Private Chitete’s selfless heroism and sacrifice helped the peacekeepers achieve their objective and dislodge the militia from its stronghold and that was vital for the Ebola response to go on”, he commended. “He personally made a difference. A profound one”.

The ceremony marked the first time the award has been conferred since its initial presentation to the family of Captain Diagne in 2016, said the Secretary-General, adding: “We could not have found a more deserving recipient”.

He died so I could live: UN peacekeeper pays tribute to fallen colleague 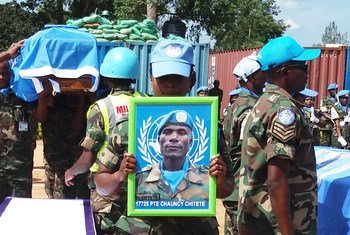 In recognition of his “brave and selfless” action under fire in the Democratic Republic of Congo (DRC)  ̶  saving the life of a fellow ‘blue helmet’ and helping his colleagues repel an armed group  ̶  the late Malawian soldier Chancy Chitete, will be honoured with the UN’s highest peacekeeping award this coming Friday, by the UN Secretary-General. 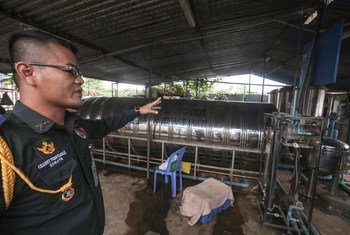 Cambodia: Giving back to UN peacekeeping

It’s an overcast morning, in South Sudan’s capital Juba, and growling thunder announces the start of some light rain. Standing in the drizzle in his military police uniform, is Colonel Channy Vongvannak, the commander of the Cambodian Force Military Police at the United Nations Mission in South Sudan (UNMISS).