Credit/The Cabinet Office of Japan
A drawing of Goryo Hamaguchi, a village leader in Hirogawa, Wakayama Prefecture, who set fire to piled sheaves of his newly harvested rice in order to warn people against tsunami on 5 November 1854.
3 November 2016
Climate and Environment

“Rather than selecting a memorial day or a tragic day, such as 11 March or 26 December, 5 November was selected as a ‘forward-looking’ day when many lives were saved due to proactive actions,” Yuki Matsuoka, Head of the United Nations Office for Disaster Risk Reduction (UNISDR) in Japan, told the UN News Centre.

There is a century and decades-long history to it. On 5 November in 1854, a massive tsunami triggered by a magnitude-8.4 earthquake struck the Kii Peninsula in Japan.  It is recorded that many lives were saved in that event when Goryo Hamaguchi, a leader in a small village, set fire to piled sheaves of newly harvested rice in his own paddy, to evacuate and guide fellow villagers to high ground in the darkness.

In Japan, this story is known as “The Fire of Inamura (rice sheaves).”

Last December, the UN General Assembly designated 5 November as World Tsunami Awareness Day, with 142 countries co-sponsoring a resolution drafted by Japan, which worked with other disaster-prone countries as well as partners such as UNISDR.

“Tsunami, originally a Japanese word, is now commonly used in English. This represents the fact that the Japanese people have the long history of grappling with tsunami hazards,” Ms. Matsuoka said.  “Japan built the people’s resilience not only by hard measures, but also by soft measures,” she added. 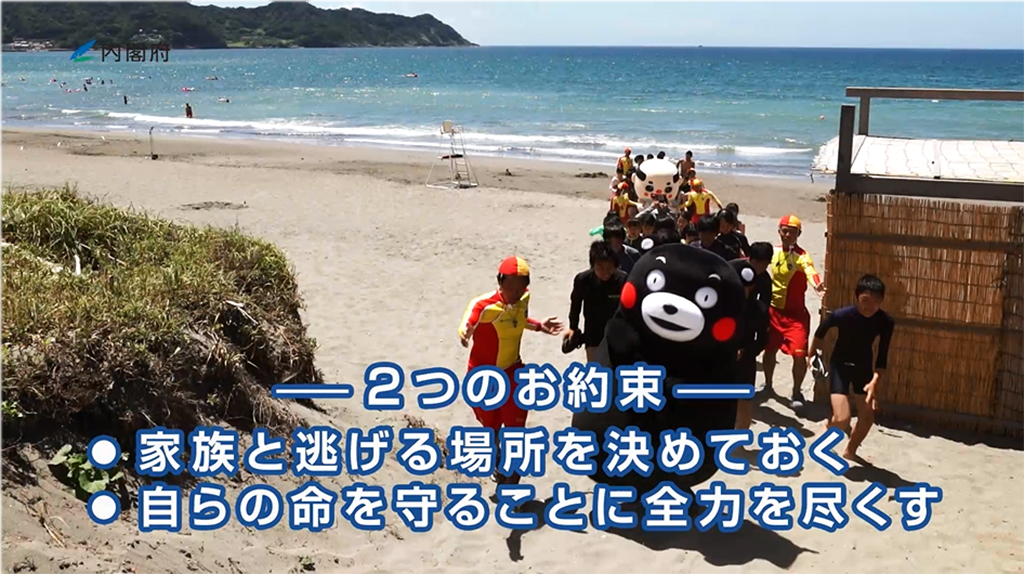 A screen capture from a promotional video featuring two mascot characters: Kumamon (front) and Ossan (back), guiding children from a beach to higher ground in an evacuation drill. The subtitle reads “Two promises: decide with your family where to evacuate and make the utmost effort to protect your own life.” Credit: Cabinet Office of Japan, Kumamon (2010 kumamoto pref. kumamon) & OSSAN(UPRIGHT)

In Japan, evacuation drills are being conducted every year in various forms and at different levels under initiatives of the national government, local authorities, schools and communities, according to Ms. Matsuoka. “These accumulated experiences have contributed to generating knowledge and expertise in disaster risk reduction to share with the international community,” she added.

Serving as a repository of this expertise is Inamura-no-Hi no Yakata, or the Hall of the Fire of Rice Sheaves, which was established in 2007 in the small municipality of Hirogawa in Wakayama Prefecture, where Goryo Hamaguchi was born.

Japan built the people’s resilience not only by hard measures, but also by soft measures

“The fundamental purpose of using ‘the Fire of Inamura’ as educational material is to make everyone understand the importance of prompt evacuation,” Kouichi Sakiyama, the Hall’s Director, told the UN News Centre.

Mr. Sakiyama explained that in tsunami-prone places, measures have been taken to prevent causalities and damage, such as building sea walls, embankments and other structures.  “It’s natural that people feel a sense of security when they see these big, stark structures, but in reality, people may just rely on those facilities,” he said, warning that a lack of knowledge about the mechanism of tsunami could lead to wrong actions.

“Now that the date for the Fire of Inamura has been designated as World Tsunami Awareness Day, I take it that our Hall has assumed the responsibility to spread to the world the message that evacuation is critical in the event of tsunamis,” he said. “We are determined to carry out that responsibility.”

The theme of the first World Tsunami Awareness Day is “Education and Evacuation Drills.”

Jerry Velasquez, Chief of Advocacy and Outreach Section of UNISDR, headquartered in Geneva, told the UN News Centre that education and evacuation drills are key components of stopping tsunamis from turning into full-blown disasters with massive fatalities.

“Even the technologically most advanced early warning systems in the world are only as good as their ability to reach the public and to provoke the appropriate reaction to the warning,” said Mr. Velasquez.

Various tsunami awareness raising initiatives are under way around the world.

According to UNISDR, crucial to success is to keep awareness-raising as jargon-free as possible.  Scientific accuracy is important, but messages have to be as clear as possible to the general public to achieve their aims. 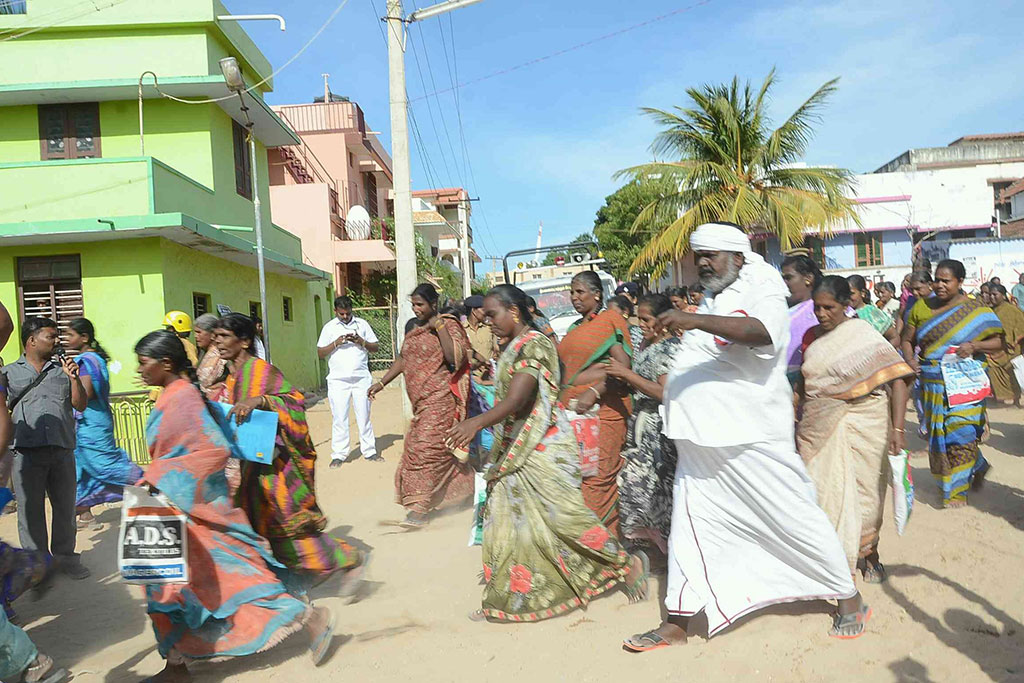 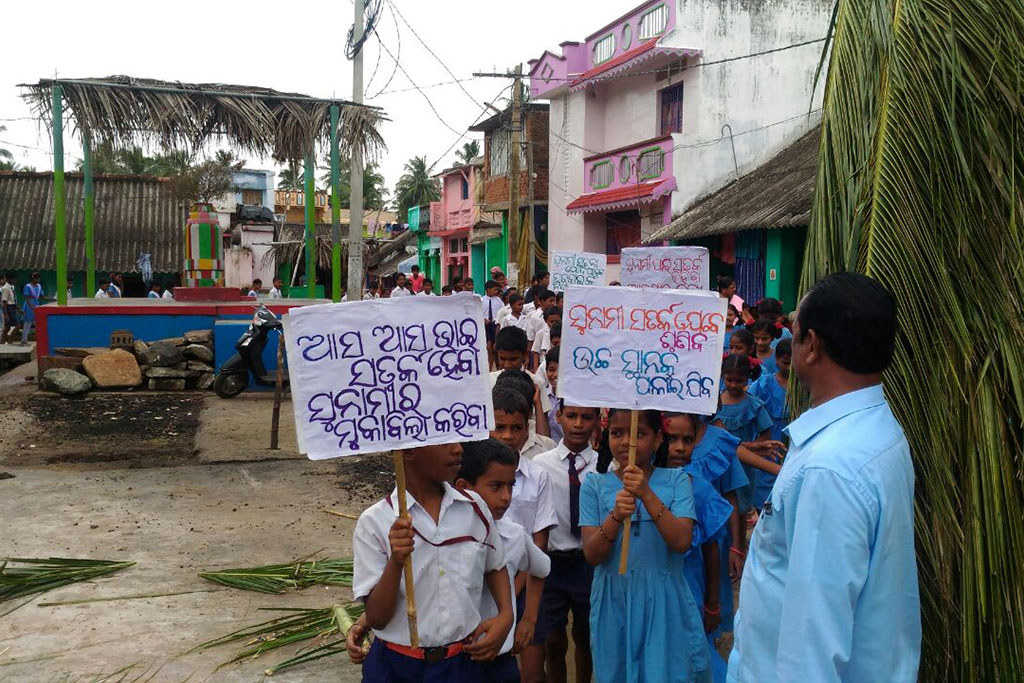 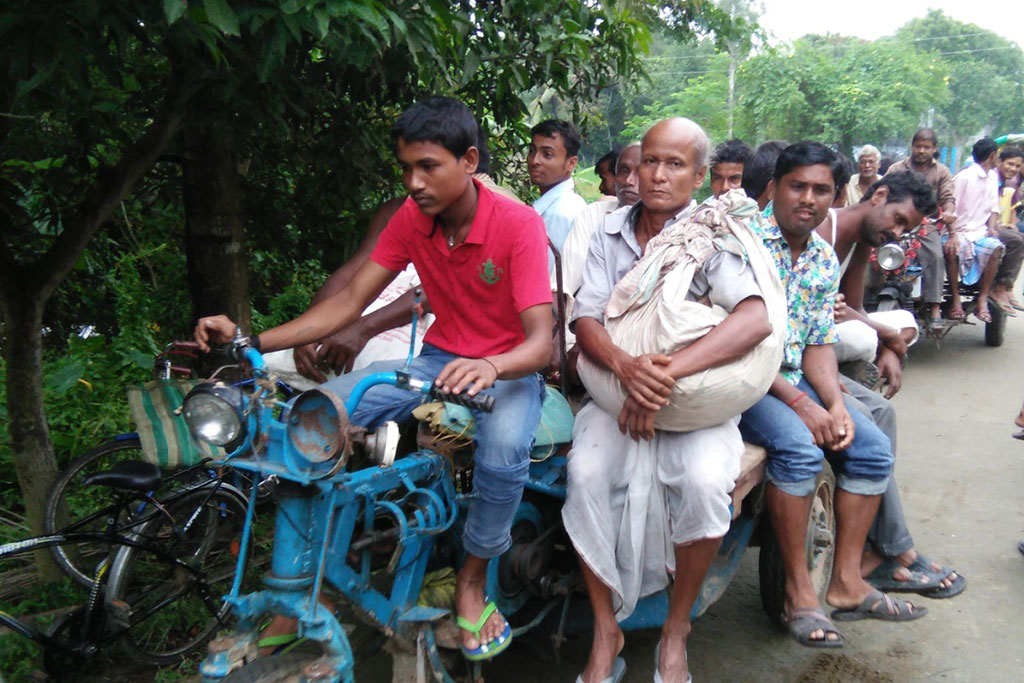 Local residents of Odisha, India, are being transported to an evacuation site in an Indian Ocean-wide tsunami mock drill in September 2016. Photo/Indian National Centre for Ocean Information Services (INCOIS), Ministry of Earth Sciences, Government of India 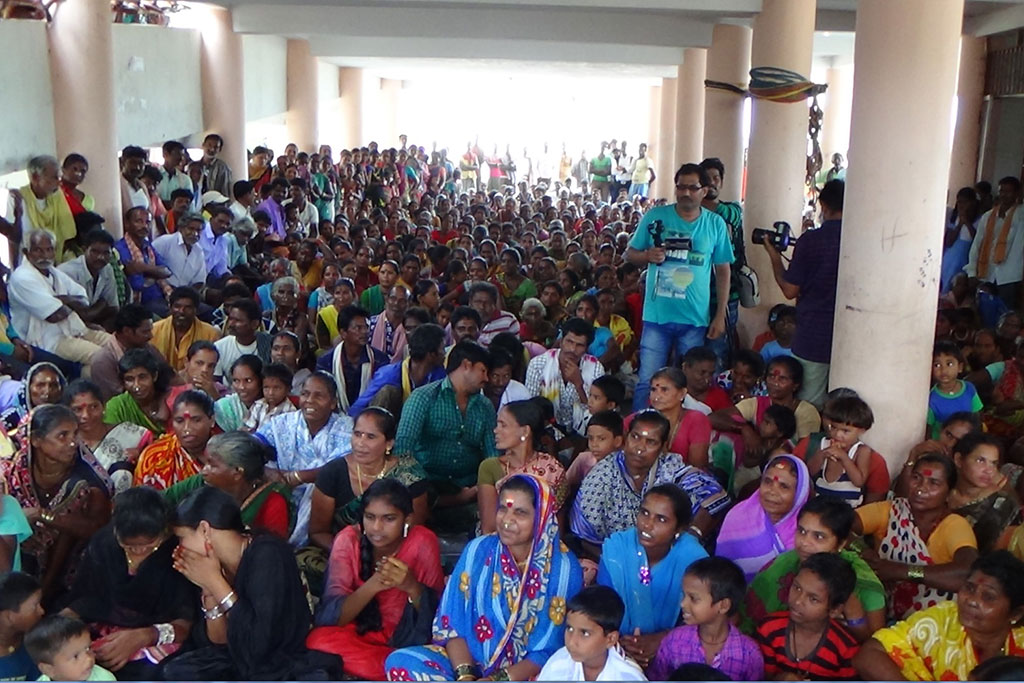 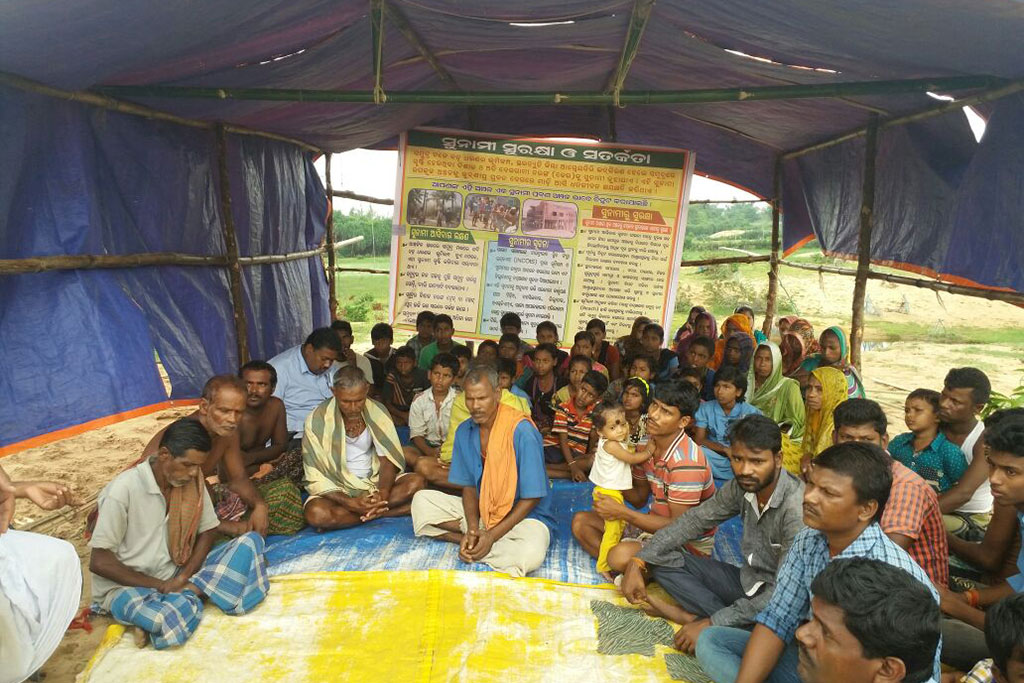 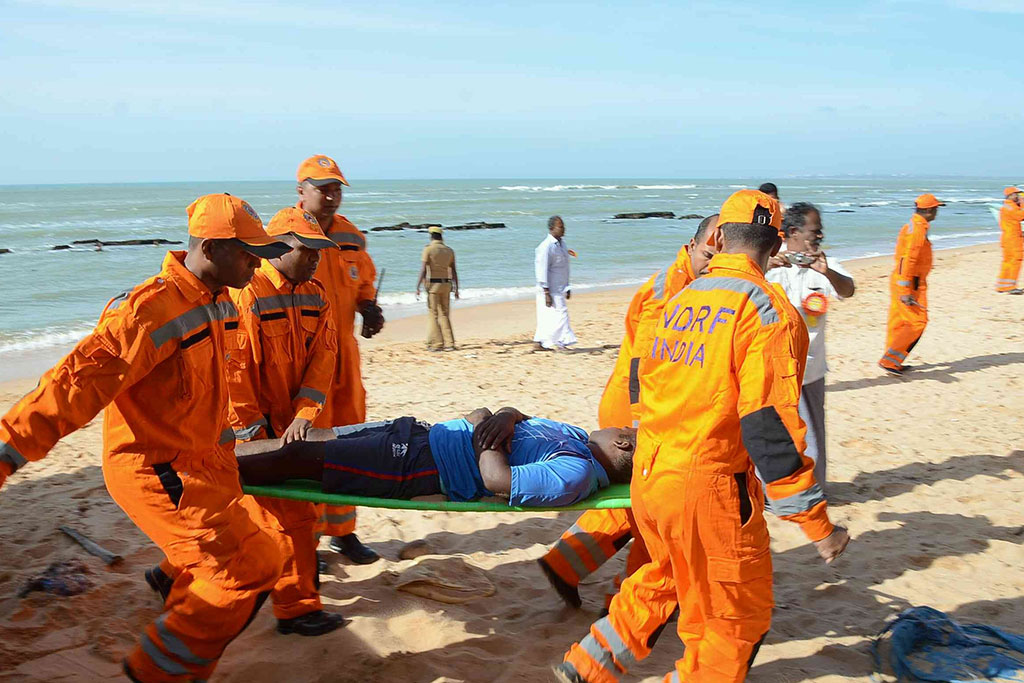 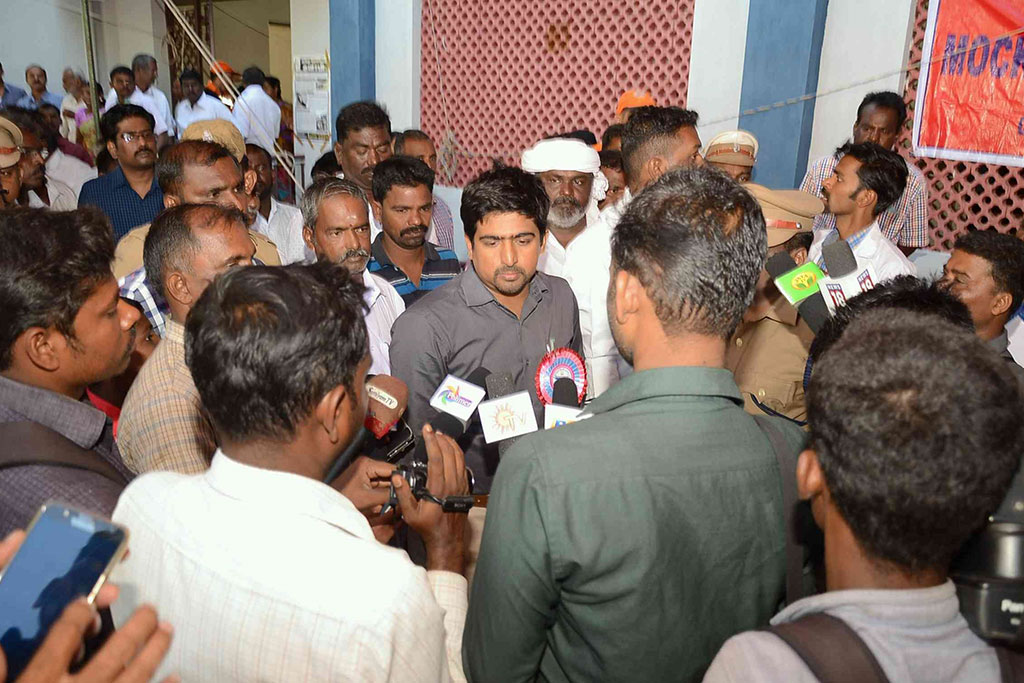 In a unique effort, the Cabinet Office of Japan has “appointed” mascot characters as “envoys” for raising tsunami risk awareness.  They participate in various events and lead tsunami evacuation drills across the country.  Their message is clear: when a tsunami occurs, each person should evacuate immediately and as fast as possible.  It is important to decide with family members where you will escape to and make the utmost effort to protect your own life.

“Trust that your family is also evacuating, and get yourself to high ground as fast as your legs can carry you. Reunite with your family after you have evacuated,” they say.

In India, the exercise involved evacuation of around 35,000 people from the coastal regions, including Andaman and Nicobar Islands, Odisha, Andhra Pradesh, Tamil Nadu, West Bengal, Kerala, Gujarat and Goa.

Named “IOWave16,” the two-day mock drill was organised by the Intergovernmental Oceanographic Commission of the UN Educational, Scientific and Cultural Organization (UNESCO), which coordinated the setting up of Indian Ocean Tsunami Warning and Mitigation System (IOTWMS) in the aftermath of the December 26, 2004 tsunami triggered by an undersea earthquake off Sumatra, Indonesia.

The simulation exercise was comprehensive, including not only evacuation and rescue operation, but also a mock interview with the media. 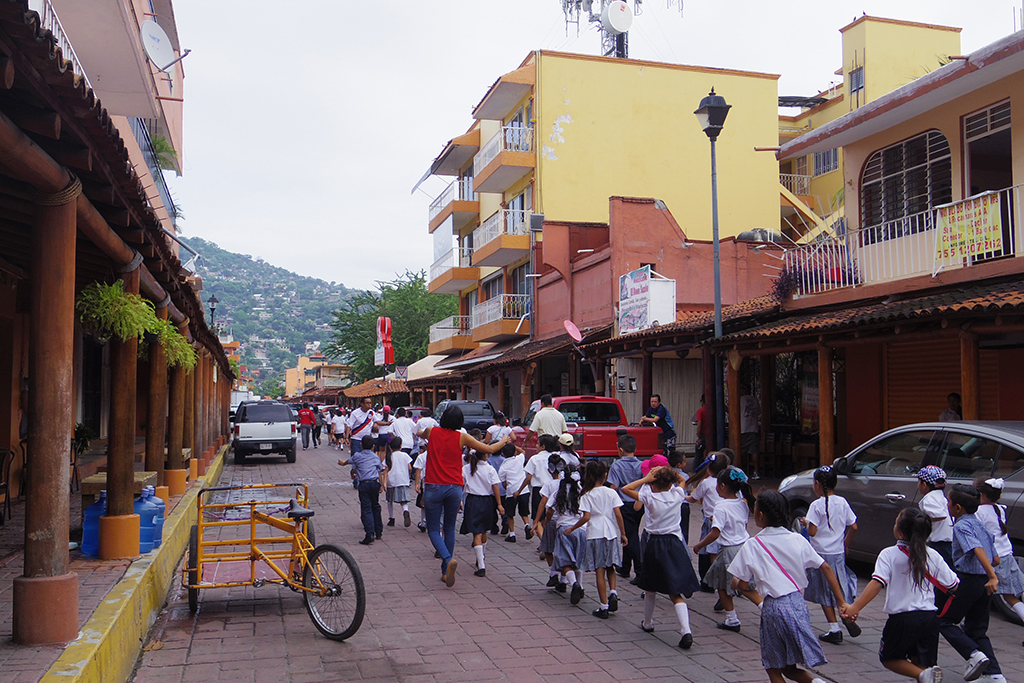 About 300 pupils and 20 staff members of Vicente Guerrero Primary School in Zihuatanejo de Azueta, State of Guerrero, Mexico, run towards a hill during a tsunami evacuation drill on 14 October 2016. Photo/SATREPS, Mexico

Drills have been conducted in various continents that have a potential tsunami risk including countries such as Mexico and Chile.

On 28 September, gathering in the Romanian capital, Bucharest, scientists and disaster risk experts from the Mediterranean and beyond have vowed to step up efforts to raise awareness among the general public of how to react to the threat of tsunamis.

“Public awareness is one of the most important activities,” said Professor Ahmet Cevdet Yalciner of Turkey’s Middle East Technical University, who chairs the Intergovernmental Coordination Group for the Tsunami Early Warning and Mitigation System in the Northeastern Atlantic, the Mediterranean and Connected Seas (ICG/NEAMTWS).

Around 130 million people live on these regions’ shores, which also include the Adriatic, Aegean, Marmara and Black Seas. The population rises sharply during the summer tourist season, meaning that risk reduction also needs to target visitors.

“There has to be an effort to make sure that messages are readable for the public,” Marzia Santini, of Italy’s Civil Protection Department, told the gathering. “In Italy, we have volunteers – ordinary citizens, not professionals – talking to other citizens about risks and how to behave in the event that hazard strikes, how to know more about the basics of risk management and so on,” she said.

Meanwhile, Greece deploys a “tsunami tank.” By cranking a handle, passers-by generate model tsunamis and see their impact. “This really motivates people to ask about tsunamis, so we have a great opportunity to tell them about risk,” said Areti Plessa of the Institute of Geodynamics at the National Observatory of Athens.

In April, Israel organized its “Blue Wave” exercise, in cooperation with Greece, Italy and Turkey.  Two weeks beforehand, the authorities put up tsunami signs – which are there to stay – thereby generating public attention for the exercise.

The Miracle of Kamaishi is actually not a ‘miracle,’ but the result of awareness and education

These measures are critical as there are episodes that show lives were saved due to preparedness.

In Japan’s 2011 disaster, almost all of the nearly 3,000 elementary and junior high school students in Kamaishi City in Iwate Prefecture survived the tsunami, Ms. Matsuoka of UNISDR Japan said.

Immediately after the magnitude 9.0 earthquake struck that afternoon, the students of Kamaishi East Junior High School ran out of the school towards higher ground. Their quick evacuation prompted the children and teachers of the neighboring Unosumai Elementary School to follow, and consequently led many other local residents to follow.

As they continued to run, older students supported the younger ones, and together they reached a safe location while the mega-tsunami swallowed their schools and the town. This episode came to be known as “the Miracle of Kamaishi,” Ms. Matsuoka said.

According to UNISDR, there are similar tales in other parts of the world, like the story of Tilly Smith, a British girl who, at the age of 10, is credited with saving 100 holiday makers in a Thai resort during the Indian Ocean Tsunami of 2004 thanks to a geography lesson at her school that taught her the tell-tale signs of a looming tsunami.

But in many disaster situations, making sound judgement is not as easy as in those textbook examples.

According to Japanese media reports, 74 students and 10 teachers at Okawa Elementary School in Ishinomaki, Miyagi Prefecture, either died or are still missing, after the 2011 tsunami. Bereaved family members of 23 students sued the Miyagi prefectural and Ishinomaki municipal governments – which run public schools – for compensation.  The plaintiffs argued that school officials were negligent in not evacuating the students to a hill in the back of the school where there would have been a greater chance of escaping the deadly waves.  The defendants argued that the hill was not adequate for an evacuation location as it had a risk of fallen trees.

“These stories from Tohoku [Northeast] Region in Japan are indeed sending a critical message to the world,” Ms. Matsuoka said.

“The Miracle of Kamaishi is actually not a ‘miracle,’ but the result of awareness and education,” she said.  “They could evacuate effectively on that day based on their knowledge and correct judgement through what they had learnt.”

“By raising tsunami awareness through World Tsunami Awareness Day, we can save lives and mitigate the devastating damages caused by tsunamis,” she concluded.