People cross a flooded river in Haiti with the help of a rope and porters after the bridge was washed away by Hurricane Matthew. Photo Logan Abassi UN/MINUSTAH
13 October 2016
Humanitarian Aid

The report, “Poverty & Death: Disaster Mortality 1996-2015,” was released by the UN Office for Disaster Risk Reduction (UNISDR) to mark the International Day for Disaster Reduction and found that earthquakes and tsunamis are the biggest killers overall, with climate-related disasters close behind.

“On this [International Day], I call on all Governments to work with civil society and the private sector to move from managing disasters to managing risk. Let us move from a culture of reaction to one of prevention and build resilience by reducing loss of life,” said Mr. Ban in his message.

This year's International Day also marks the launch of UNISDR's new Sendai Seven campaign, which focuses on targets from the Sendai Framework for Disaster Risk Reduction. The framework's first target is to reduce global disaster mortality substantially by 2030 and is accompanied by the slogan Live to Tell, as well as a social media campaign that aims to reach 20 million people.

In his message, Mr. Ban noted that while high-income countries suffer massive economic loss in disasters, those in low-income countries “pay with their lives.” The report found a direct correlation between disaster death tolls and income and development levels. Over the twenty-year period examined in the study, low and middle income countries accounted for 1,221,490 of 1.35 million deaths.

The Sendai Framework and the Sustainable Development Goals. Credit: UNISDR

Haiti, for example, suffered a devastating earthquake in 2010, three years of El Niño-related drought, and last week's Hurricane Matthew, which, at the latest count has left more than 400 people dead. With 229,699 deaths over the past twenty years, Haiti tops the list for disaster-related deaths. Indonesia (182,136) and Myanmar (139,515) follow. Not a single high-income country was listed in the top 10.

However, high-income countries figure into a list of the twenty deadliest disasters: the 2003 European heatwave that left many dead throughout Italy, France, Spain and Germany and the 2011 earthquake in Japan accounted for more than 83,000 lives lost.

Robert Glasser, the head of UNISDR, drew attention to the rising influence of climate change and inequality in disasters: “The vast majority of climate-related deaths occur in low and middle-income countries which contribute least to greenhouse emissions. These countries also bear the brunt of earthquake deaths.”

Dr. Debarati Guha-Sapir, head of the Centre for Research on the Epidemiology of Disasters acknowledged that the statistics in the UNISDR report impact the ability to achieve the UN Sustainable Development Goals (SDGs) by 2030. While the report indicates overall trends, she cautioned that “they do not present the full picture as there are gaps in the reporting on disaster mortality, particularly for heatwaves which have become much more prevalent over the last twenty years.”

UNISDR's recognition celebrates the launch of the 'Sendai Seven Campaign: Seven Targets, Seven Years,' which was adopted by UN Member States last March. The Sendai Seven Campaign is an opportunity for governments of all levels, community groups, civil society organisations, the private sector, international organisations and the UN family to promote and share best practices at all levels and across sectors in order to reduce disaster risk and loss.

The Secretary-General in his message reminded that “eradicating extreme poverty – the first of the 17 Sustainable Development Goals, is essential to reducing disaster risk,” and called on all Governments to “move from a culture of reaction to one of prevention.”“We can replace material possessions, but we cannot replace people,” he stated.

In an opinion piece published today in the Huffington Post, the Secretary-General’s Special Envoys on El Niño and Climate, Mary Robinson and Macharia Kamau, Ambassador of Kenya to the United Nations, said the International Day is a time to reflect on ways to reduce the impact of disasters on people around the world. “There is no one-size-fits-all approach, but we know what works, and we committed as an international community to doing things differently in 2015,” they stressed.

Citing the devastating impact Hurricane Matthew has had on Haiti and, while father from the headlines, the dire effects of prolonged drought linked to this year’s El Niño event, the Envoys stressed that changes to our climate are driving more extreme weather.

“This ‘new normal’ demands a different way of doing things, both in our actions to reduce and adapt to the impacts of climate change, but also in the ways that we prepare for, and respond to, these climate-linked threats” the stated.

“What is needed now is the political will to act, and a clear and simple plan for implementing these commitments,” the envoys said, announcing that they are jointly developing a ‘Blueprint for Action’ they hope will help catalyze and guide the necessary investments to prevent recurring weather events from becoming disasters.

“Hurricane Matthew serves as a painful reminder that we have no time to waste. Let us get to work now, to address the immediate suffering caused by Hurricane Matthew and El Niño; to adapt to the new climate reality; and to ensure that no one is left behind,” they underscored. 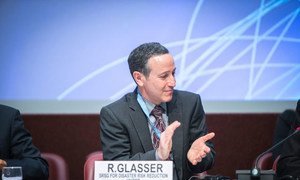