OCHA/Gemma Connell
Civilians have borne the brunt of fighting in Wau and across South Sudan.
11 July 2016

Ahead of a meeting with the United Nations Security Council tomorrow on South Sudan, Secretary-General Ban Ki-moon has urged the body to impose an immediate arms embargo, enact additional targeted sanctions on leaders and commanders blocking implementation of the peace deal, and to fortify the UN mission in the country, which has seen a resurgence of deadly violence in recent days.

“This is the time to massively reinforce UN action. When a Government cannot or will not protect its people, and when warring parties seem more intent on enriching and empowering themselves at the expense of their people, the international community has a responsibility to act,” the Secretary-General told reporters at UN Headquarters in New York today.

“I call on the Security Council and the entire membership of the United Nations to rise to this moment and protect the human rights of South Sudanese,” he added.

Over the weekend, Mr. Ban, along with the Council and the UN Mission in South Sudan (UNMISS) condemned the deadly violence and urged calm in the wake fresh clashes in Juba between soldiers of the Sudan People's Liberation Army (SPLA) and the SPLA in Opposition.

Expressing his deep condolences to the families and loved ones of those who have been killed in the fighting in the capital city of Juba over the past four days, Mr. Ban condemned the killing of two Chinese peacekeepers and one UN national staff member.

“The renewed violence is outrageous. It is yet another grievous setback. It deepens the country’s suffering. It makes a mockery of commitments to peace,” the UN chief said, adding that there are growing fears that many more people could die in another round of violence.

Despite the August 2015 peace agreement that formally ended the war – which began in late 2013 after a simmering political face-off between President Salva Kiir and his then former Vice-President Riek Machar boiled over – conflict and instability has spread to previously unaffected areas in the Greater Equatoria and Greater Bahr-El-Ghazal regions of South Sudan. This past month, deadly clashes in Wau resulted in the deaths of more than 40 people, while up to 35,000 fled their homes. Such fighting is characteristic of the trend that produced fresh refugee outflows this year, a spokesperson for the Office of the UN High Commissioner for Refugees (UNHCR) said this past Friday.

The events in Juba come shortly after escalation of conflict in other parts of the country in recent weeks, disrupting lives and livelihoods. In Wau, where fighting has displaced at least 70,000 people since the end of June, the UN Children’s Fund (UNICEF) said it is working around the clock, together with partners, to provide assistance to children and their families.

In his remarks today, the Secretary-General said he is appalled by the “indiscriminate attacks” on civilians and peacekeepers, noting that the two compounds of the UN Mission in South Sudan (UNMISS) in Juba have been caught in the cross-fire and sustained mortar and heavy artillery fire.

At least two internally displaced persons have been killed in the UNMISS protection of civilians sites (PoC), and some 35 people have been injured, while thousands of civilians have fled to various locations in town, including the two compounds.

“Yet again, the leaders of South Sudan have failed their people. Rarely has a country squandered so much promise, so quickly,” Mr. Ban said, also asking: “What kind of leadership is it that resorts to deadly weapons and identity politics, time and again? Failed leadership.”

The Secretary-General emphasized that his message to President Kiir and First Vice-President Machar is clear: “Do everything in your power to de-escalate the hostilities immediately. Order your respective forces to withdraw to their bases,” he said.

“Let me underscore, again, to all those leading and perpetrating these hostilities that acts of violence perpetrated against civilians and United Nations and humanitarian personnel, assets and premises may constitute a war crime,” he added.

Noting that there must and will be accountability for the atrocities that have been committed in South Sudan since 2013, the Secretary-General said that it is not just the leaders who must “face a reckoning,” but all those in the chain of command.

Furthermore, Mr. Ban said that while he understood that President Kiir had issued an order to the SPLA last night to stop fighting, hostilities continue today and have spread to parts outside of Juba in Central Equatoria.

UN mission ‘doing all it can’ to contain volatile situation

UNMISS, for its part, is doing all it can to contain a very volatile situation, by conducting patrols within and immediately outside the protection of civilians sites. The Mission has also reinforced perimeter security to enhance protection for internally displaced people and UN staff at its two compounds, the UN chief said.

Humanitarian partners have responded rapidly and are working around the clock to assist people in Wau, South Sudan. Photo: OCHA/Gemma Connell

He noted, however, that freedom of movement and access outside of the UN compounds remains a challenge.

“I demand all the belligerent parties to guarantee unfettered access and freedom of movement to United Nations and humanitarian personnel engaged in life-saving activities in aid of the South Sudanese people,” the Secretary-General said.

Welcoming last night’s statement by the Security Council, which strongly condemned the escalating violence in and around Juba, Mr. Ban stressed that the gravity of the situation depends on a rapid response.

As such, he urged the Council to take action on three fronts: impose an immediate arms embargo on South Sudan, enact additional targeted sanctions on leaders and commanders blocking the implementation of the peace agreement, and fortify UNMISS with “desperately needed” attack helicopters and other material to fulfil the mandate to protect civilians.

In addition, the Secretary-General urged all countries contributing to UNMISS to “stand their ground,” emphasizing that any withdrawals would send “precisely the wrong signal, in South Sudan and across the world.”

The UN chief added that he is consulting with his team and concerned organizations regarding his participation in the African Union (AU) summit to consult with the Heads of State of the Intergovernmental Authority on Development (IGAD) and the region on how to restore and better secure the peace process and report to the Security Council within a week.

Asked by reporters whether he believes that President Kiir and First Vice-President Machar should step aside, the Secretary-General said that is not for him to comment, as they were elected by their own people.

“But they have a huge moral and political responsibility to keep their country in order,” Mr. Ban said.

Answering another question on the proposed arms embargo, the Secretary-General said that the Security Council has for some time been discussing the idea of imposing an arms embargo, but has been unable to agree.

Asked whether he is calling for a specific number of additional troops as part of a reinforcement of UNMISS, Mr. Ban said that the movement of troops, particularly in time of emergency, urgency and danger, has been restricted by the Government of South Sudan. In that regard, he urged the Government to allow the normal operation of UNMISS and all other diplomatic missions in South Sudan.

Noting that there are approximately 12,000 peacekeepers, including police, currently in South Sudan, the Secretary-General said that he will engage with the Security Council tomorrow regarding the specific number of reinforcements and other issues. 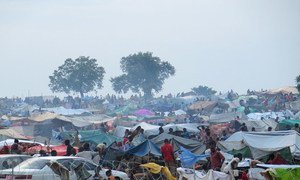 Strongly condemning the escalating violence in and around the South Sudanese capital of Juba that began on 7 July, the United Nations Security Council today joined Secretary-General Ban Ki-moon in calling for an end to the fighting, while separately demanding that President Salva Kiir and First Vice-President Reik Machar do their utmost to control their respective forces.