Strongly condemning the escalating violence in and around the South Sudanese capital of Juba that began on 7 July, the United Nations Security Council today joined Secretary-General Ban Ki-moon in calling for an end to the fighting, while separately demanding that President Salva Kiir and First Vice-President Reik Machar do their utmost to control their respective forces.

Reading out portions of a statement to the press following a three-hour closed-door emergency session, Ambassador Koro Bessho of Japan, which holds the Council's presidency for the month, said the body's 15 members had expressed particular shock and outrage at the attacks on UN compounds and protection of civilians sites in Juba.

The Council's statement followed similar expressions of outrage by Secretary-General Ban Ki-moon and the UN Mission in South Sudan (UNMISS), which both earlier today condemned the violence and urged calm in the wake fresh clashes in Juba between soldiers of the Sudan People's Liberation Army (SPLA) and the SPLA in Opposition. They also deplored that separately, UN and diplomatic officials have been targeted, as the world's youngest country on Saturday marked the fifth anniversary of its independence.

“The members of the Council condemned in the strongest terms all attacks and provocations against civilians and the United Nations. They emphasized the need for United Nations [civilian protection] sites and United Nations personnel to remain secure,” said the Council President, expressing sympathies and condolences to the families of Chinese and Rwandan peacekeepers who were killed or injured in the attacks.

Urging an immediate end to the fighting by all concerned and demanding that President Kiir and First Vice-President Machar do their utmost to control their respective forces, urgently end the fighting and prevent the spread of violence, the Council in its statement also urged the two leaders to “genuinely commit themselves to the full and immediate implementation of the peace agreement, including the permanent ceasefire and redeployment of military forces from Juba.”

People seeking shelter from ongoing fighting in Juba between soldiers of the Sudan People's Liberation Army (SPLA) and the SPLA in Opposition. Photo: UNMISS

Further to the statement, the Security Council reminded all parties, including Government security forces, of the civilian character of the protection of civilian sites in South Sudan. As such, Council members stressed that attacks against civilians and UN premises and personnel may constitute war crimes.

They also emphasized the importance of transparent investigations into these crimes and that those involved must be held accountable and could be potentially subject to sanctions as authorized under Council resolution 2206 (2015) for actions that threaten the peace, security or stability of South Sudan.

The Council expressed its support for UNMISS and its readiness to consider enhancing the Mission to better ensure that the UNMISS and the international community can prevent and respond to violence in South Sudan, the President said.

“The members of the Security Council encouraged States in the region to prepare to provide additional troops in the event the Council so decides. In the interim, [the Council] stressed the need for UNMISS to make full use of its authority to use all necessary means to protect civilians,” he concluded.

For his part, the Secretary-General strongly urged the country's leaders to do everything in their power to de-escalate the hostilities immediately and to order their respective forces to disengage and withdraw to their bases, saying: “This senseless violence is unacceptable and has the potential of reversing the progress made so far in the peace process.”

According to the Secretary-General, UN compounds and civilian protection sites in Juba have been caught in the cross-fire. Expressing deep frustration that despite commitments by South Sudan's leaders, fighting has resumed, Mr. Ban said they must take decisive action to regain control of the security situation in Juba.

People seeking shelter from ongoing fighting in Juba between soldiers of the Sudan People's Liberation Army (SPLA) and the SPLA in Opposition. Photo: UNMISS

̴[They must also] prevent the spread of violence to other parts of the country; guarantee the safety and security of civilians, United Nations and other personnel; and genuinely commit themselves to the full implementation of the peace agreement,” he stated.

Earlier this morning, UNMISS expressed outrage at the resumption of violence in Juba, which it said was severely impacting the civilian population.

[Civilian protection sites have been up and running in various parts of South Sudan for the past two years and according to its most most recent update, UNMISS estimates that the number of civilians seeking safety in the six sites located on UNMISS bases is 169,418.]

The heavy fighting downtown Juba had forced hundreds of civilians to seek protection at UNMISS' Tomping base, the statement went on to say and added: “The United Nations is gravely concerned about reports that armed forces have prevented civilians from seeking protection.”

Both UNMISS compounds in Juba sustained impacts from small arms and heavy weapons fire, the Mission reported. “The United Nations urges all parties to respect the sanctity of the United Nations and condemns any deliberate targeting of United Nations premises and its personnel,” it added.

“The Special Representative of the Secretary-General has directly called on the leadership at the highest level in South Sudan to immediately restrain their forces, to engage in dialogue to find a political solution to this crisis and to allow access to the United Nations to be able to patrol in order to reassure the civilian population,” the statement concluded.

Just two days ago, the Office of the UN High Commissioner for Refugees (UNHCR) noted that South Sudan has spent much of its short life at war with itself, riven by a political face-off between President Kiir and his then former Vice-President Mr. Machar that erupted into full-blown conflict late in 2013. Some 2.4 million people fled their homes in fear, before an August 2015 peace deal ended the major offensives. The country marked the fifth anniversary of its independence on 9 July.

Despite the August 2015 peace agreement that formally ended the war, conflict and instability has spread to previously unaffected areas in the Greater Equatoria and Greater Bahr-El-Ghazal regions. This past month, deadly clashes in Wau resulted in the deaths of more than 40 people, while up to 35,000 fled their homes. Such fighting is characteristic of the trend that produced fresh refugee outflows this year, a UNHCR spokesperson said Friday.

The UN Children's Fund (UNICEF) yesterday expressed its “deep alarm” at the renewed violence and called on all parties to respect humanitarian principles and provide unrestricted access to civilians in need. After nearly three years of war, civilians are bearing the brunt of the conflict, with women and children facing the greatest dangers and hardships, the agency added.

“Children and their families in South Sudan have suffered enough from violence, displacement and killings in this brutal conflict. It is time that peace becomes more than agreements on paper, but a reality for those who are most vulnerable,” said UNICEF Regional Director for Eastern and Southern Africa, Leila Pakkala.

The events in Juba come shortly after escalation of conflict in other parts of the country in recent weeks, disrupting lives and livelihoods. In Wau, where fighting has displaced at least 70,000 people since the end of June, UNICEF said that the agency and its partners are working around the clock to provide assistance to children and their families. 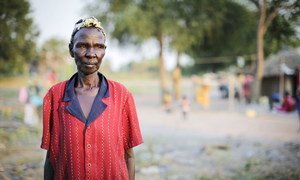 As South Sudan prepares to mark its fifth anniversary of independence, United Nations officials today expressed concern over the continuing violence in parts of the country and the resulting forced displacement of people, both internally and throughout the neighbouring region.