The United Nations peacekeeping mission in South Sudan is providing shelter to thousands of civilians, mainly women and children, who have sought protection in a base in the country’s northwest today.

“There are around 5,000 civilians taking refuge inside the UN camp overnight, mostly women and children, and hundreds gathered around the camp for safety,” the spokesperson for the UN Department of Peacekeeping Operations (DPKO), Kieran Dwyer, told the UN News Centre.

“All are well and will be provided care for as long as necessary,” he added.

According to media reports, the town of Wau – the capital of Western Bahr el-Ghazal state – has been affected by violence and protests that began last week after officials said they would move the seat of local government out of Wau to the nearby town of Bagare.

At least two people have reportedly died in continuing violence, in which buildings were also set on fire, in addition to causing the thousands of people to seek safety at the local base of the UN Mission in South Sudan (UNMISS).

UNMISS has deployed ‘blue helmets’ and armoured personnel carriers to secure Wau airport and patrol the city and nearby settlements. The peacekeepers observed a number of fires, as well as groups of up to 300 youths, some of whom possessed sticks, spears and machetes.

“UN peacekeepers have moved armoured personnel carriers into positions to protect civilians around the camp area,” Mr. Dwyer added. “The mission is working closely with the Government, who have the responsibility to address this matter and the lead role in protecting the civilian population.”

South Sudan became independent from Sudan in July last year, six years after the signing of the peace agreement that ended decades of warfare between the north and the south. During the same month, the Security Council established UNMISS with the purpose of consolidating peace and security and to help establish conditions for development. 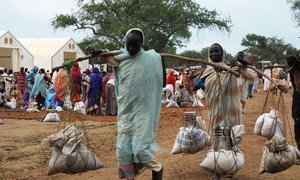 The United Nations is calling on South Sudan’s security forces to exercise maximum restraint after nine civilians were killed and many more injured in incidents involving protestors and police last weekend in the city of Wau.