UNMISS
UN peacekeepers in South Sudan assisting civilians caught up in the violence in Wau, the capital of Western Bahr El Ghazal state.

20 December 2012
The United Nations peacekeeping operation in South Sudan reports that the situation in the town of Wau remains tense, following the arrival of some 5,000 people seeking safety at a UN base there yesterday, a spokesperson for the world body said today.

“Earlier today, many of those who sought UN protection and stayed overnight left the base to inspect their homes – a significant number of civilians, mainly women, children and the elderly, remain in the UN base and continue to be protected,” added the spokesperson, Eduardo Del Buey, in a news briefing at UN Headquarters in New York.

Thousands of civilians, mainly women and children, had sought protection at a local base of the UN Mission in South Sudan (UNMISS) in Wau – the capital of Western Bahr el-Ghazal state, in the country’s northwest – on Wednesday, amidst violence and protests that began last week after officials said they would move the seat of local government out of Wau to the nearby town of Bagare.

At least two people have reportedly died in the violence, in which buildings were also set on fire.

On Wednesday, UNMISS deployed ‘blue helmets’ and armoured personnel carriers to secure Wau airport and patrol the city and nearby settlements. The peacekeepers observed a number of fires, as well as groups of up to 300 youths, some of whom possessed sticks, spears and machetes.

“The UN Mission continues to safeguard the airport and has conducted patrols to assess the situation in the city and affected outlying settlements,” Mr. Del Buey told journalists. “The Mission is also redeploying additional peacekeepers to Wau in order to assist in the protection of civilians.”

Mr. Del Buey added that UN humanitarian agencies stand ready to provide assistance, and that UNMISS is urging authorities and community leaders to “exercise restraint and engage in peaceful dialogue in order to prevent a further deterioration of the fragile situation.”

The UN peacekeeping operation is working on the matter closely with the Government of South Sudan, which has the lead role in protecting the civilian population.

South Sudan became independent from Sudan in July last year, six years after the signing of the peace agreement that ended decades of warfare between the north and the south. During the same month, the Security Council established UNMISS with the purpose of consolidating peace and security and to help establish conditions for development. 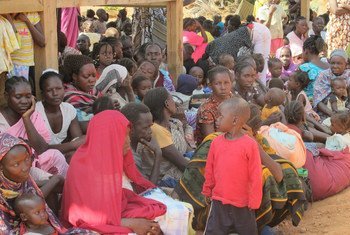 19 December 2012
The United Nations peacekeeping mission in South Sudan is providing shelter to thousands of civilians, mainly women and children, who have sought protection in a base in the country’s northwest today.