UN Photo/Eskinder Debebe (file)
A wide view of a meeting of the representatives of Middle East Quartet (namely, the UN, the United States, the Russian Federation and the European Union).
1 July 2016

The so-called Middle East Quartet – comprising the UN, Russia, the United States and the European Union – has been working on the report since February.

In it, they call on each side to “independently demonstrate, through policies and actions, a genuine commitment to the two-state solution” and to “refrain from unilateral steps that prejudice the outcome of the final negotiations.”

In summary, the Quartet reiterated that a negotiated two-state outcome is the only way to achieve an enduring peace that meets Israeli security needs and Palestinian aspirations for statehood and sovereignty, ends the occupation that began in 1967, and resolves all permanent status issues.

The report provides recommendations to what it has identified as the major threats to achieving a negotiated peace: continued violence, terrorist attacks against civilians and incitement to violence; settlement construction and expansion; and the Palestinian Authority’s lack of control in Gaza.

In a statement, the Quartet Principals invite the Israeli and Palestinian Governments to engage with it on implementing its recommendations and creating conditions to resume “meaningful negotiations that resolve all final status issues.”

Following the release of the report, the UN Secretary-General encouraged the parties to engage with the Quartet to implement the findings “to rebuild hope among Palestinians and Israelis in a political solution and to create the conditions to return to meaningful negotiations.”

Construction in the Israeli settlement of Ariel in the West Bank. Photo: Annie Slemrod/IRIN

He underscored that there is a strong need for affirmative steps to reverse negative trends on the ground which risk entrenching a one-State reality of “perpetual occupation and conflict” which is incompatible with the national aspirations of both peoples.

In addition to these recommendations, the Quartet encouraged the international community to accelerate its efforts to address the “dire” humanitarian, reconstruction and recovery needs of the people in Gaza, including expediting the disbursement of assistance pledges.

The Special Coordinator for the Middle East Peace Process, Nickolay Mladenov, briefed the UN Security Council on the report yesterday. He said it is now time for both the Israelis and the Palestinians to rise to the challenge. 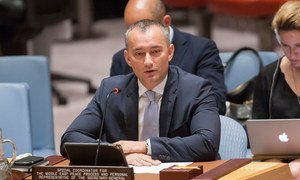 Continuing violence, terrorism and incitement, settlement expansion, and the Palestinian Authority’s lack of control of Gaza are hurting the Middle East peace process, the United Nations envoy today said summarizing the first ever report by the diplomatic Quartet – comprising the United Nations, Russia, the United States and the European Union – to the Security Council.