UN Photo/Loey Felipe
Nickolay Mladenov, UN Special Coordinator for the Middle East Peace Process and Personal Representative of the Secretary-General to the Palestine Liberation Organization and the Palestinian Authority, briefs the Security Council.

30 June 2016
Continuing violence, terrorism and incitement, settlement expansion, and the Palestinian Authority’s lack of control of Gaza are hurting the Middle East peace process, the United Nations envoy today said summarizing the first ever report by the diplomatic Quartet – comprising the United Nations, Russia, the United States and the European Union – to the Security Council.

“The main objective of this report is not about assigning blame,” Nickolay Mladenov, Special Coordinator for the Middle East Peace Process, told the 15-member council.

“It focuses on the major threats to achieving a negotiated peace and offers recommendations on the way forward.”

Those include references to both sides, and specifically to the Palestinians and Israelis in relation to violence, incitement to violence, Israeli settlement construction and related policies, Palestinian unity and institution building.

The UN envoy reiterated several times the urgent need for the parties to engage on these recommendations: “The Quartet has outlined a reasonable set of steps that, if implemented sincerely and resolutely, with support from the international community, could set Israelis and Palestinians firmly along a navigable course towards establishing a comprehensive peace with historic implications for the entire region.”

He also noted that a permanent status agreement on ending the conflict could only be achieved through “direct, bilateral negotiations, the outcome of which cannot be prejudged by unilateral steps that would not be recognized by the international community.”

In summary, he called for leadership and vision, saying they have been “starkly absent from this conflict for far too long” and replaced by “empty platitudes.”

The Security Council met amid fresh violence in the region. Just a few hours earlier, a 13-year-old girl was stabbed to death by a Palestinian at her home in West Bank. Earlier in the month, four Israelis died in an attack in Tel Aviv, and a Palestinian teenager was killed by Israeli Security Forces on a highway.

“All three incidents clearly illustrate the environment of fear in which both Palestinians and Israelis have lived for generations,” Mr. Mladenov said.

“Palestinian frustration cannot be wished away,” he said, adding that “neither will the violence and terror, fuelled by resentment, bring about a Palestinian state.”

In its report – which will not be published until later this week – the Quartet pledges its active support for ending the Israeli-Palestinian conflict on the basis of Security Council resolutions 242 (1967) and 338 (1973). It also reaffirms that a negotiated two-State outcome that meets Israel’s security needs and Palestinians’ aspirations for statehood and sovereignty, ends the occupation that began in 1967, and resolves all permanent status issues is the only way to achieve an enduring peace.

“It is time for both sides to rise to the challenge,” he concluded. 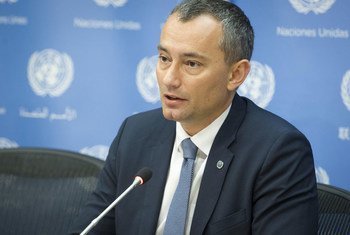 23 March 2016
The United Nations envoy for the peace process in the Israeli-Palestinian conflict today unveiled a plan by the diplomatic Quartet – comprising the UN, Russia, the United States and the European Union – to produce a report that would help create a political environment for the two sides to resume peace negotiations.