The attack reportedly claimed the lives of 10 people and injured at least 15 others.

In a statement issued by his Spokesperson, Mr. Ban said he expects the perpetrators to be swiftly brought to justice.

“He sends his heartfelt condolences to the families of the victims, as well as to the people and the Governments of Turkey and Germany and other foreign citizens impacted by the bombing,” the statement noted. “He wishes those injured a speedy recovery.”

“Mr. Al-Nasser expressed his profound sadness over the outrageous attack that targeted innocent people,” said a statement issued by his Spokesperson.

It added that the High Representative reaffirmed that such “heinous acts” are clear threats to peace and security and run contrary to the values of tolerance, peaceful dialogue and mutual respect that constitute the core of the mission of the UN Alliance of Civilizations, of which the Government of Turkey is a co-sponsor.

In addition, Mr. Al-Nasser said that in the midst of such a “tragic event,” the international community should remain united in their stand against terrorists and in countering all forms of violence and terrorist acts. 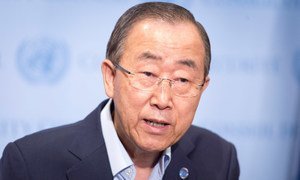