Turkish President Recep Tayyip Erdogan on Friday presented UN Secretary-General António Guterres with a plan for resettling hundreds-of-thousands of Syrian refugees, in the wake of the country’s offensive into northeastern Syria last month to remove Kurdish forces, aimed at creating a so-called “safe zone” along the border for returnees.

The UN chief is on a visit to Turkey, and in a statement following their bilateral meeting, both he and President Erdogan expressed their “full backing” for the on-going Syria Constitutional Committee meetings, which constitute the first face-to-face talks between Government and opposition from the war-torn country in nearly nine years of brutal civil war.

“The Secretary-General expressed his deep appreciation for the strong cooperation and support of Turkey to the United Nations”, the statement issued by the UN Spokesperson’s Office said, following which, the Turkish leader outlined his Government’s plan for reportedly returning up to two million of the roughly 3.6 million Syrian refugees who have found sanctuary over the border since 2011.

“The Secretary-General stressed the basic principles relating to the voluntary, safe and dignified of return of refugees. He informed the President that UNHCR (the UN refugee agency) will immediately form a team to study the proposal and engage in discussions with Turkish authorities, in line with its mandate.”

The Turkish northeast Syria offensive launched on 9 October in the wake of United States President, Donald Trump’s decision to pull US troops out of the region, has “severely impacted” an already dire humanitarian situation, says the UN, with more than 180,000 civilians fleeing the border areas, including into neighbouring Iraq.

Turkey has justified its offensive, saying that the US-allied Kurdish militia, which did the bulk of the fighting in the successful campaign against ISIL extremists, are terrorists. A Russian-negotiated truce saw the start of joint Russian and Turkish patrols on Friday, according to news reports, aimed at enforcing the “safe zone” to a depth of around 30 kilometers south of the border.

Russia has reportedly confirmed that Kurdish YPG fighters had left the zone within the 150-hour deadline laid down by the truce.

Apart from Syria, President Erdogan and Mr. Guterres also had “a constructive exchange of views on a number of ongoing situations in the region, including Yemen, Libya and the Middle East peace process, as well several additional issues of mutual concern in other parts of the world.” 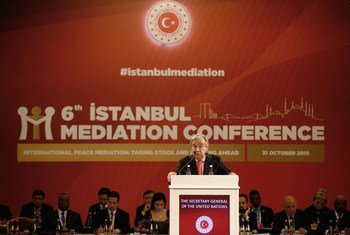 Mediation is “one of our most important tools to reduce and end conflict”, United Nations Secretary-General António Guterres told the sixth Istanbul Mediation Conference, in Turkey's largest city on Thursday. 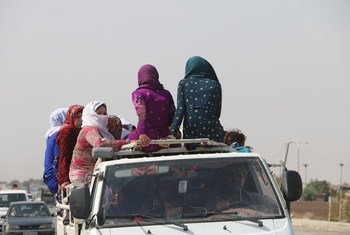