UNICEF/Delil Soleiman
Families in tents in the reception area of Syria's Al-Hole camp, tense since the announcement of US troop withdrawals from the area.
10 October 2019
Peace and Security 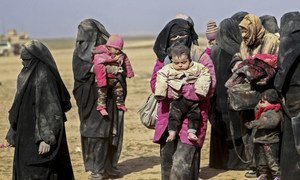 A de-escalation of a conflict in northern Syria is “absolutely essential,” the UN Secretary-General António Guterres said on Thursday.

Speaking to journalists in Copenhagen, the UN chief said that he did not “believe in military solutions for the Syrian problem, also for any other problem in the world. I always strongly believe in political solutions.”  He also expressed concern over the humanitarian situation and civilian displacement.

The UN Refugee Agency, UNHCR said earlier that tens of thousands of civilians were on the move to escape the fighting. 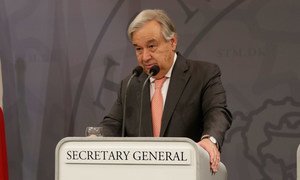 In his first international trip since the first-ever Climate Action Summit in New York, the Secretary-General on Thursday  highlighted the role of cities in the climate crisis, speaking at the C40 World Mayor's Summit in Copenhagen, a forum for member cities to present innovative actions in healing the planet.

"Cities are responsible for more than 70 per cent of global greenhouse gas emissions", Mr. Guterres said a press conference, "so cities are critical, and they are largely where the battle will be won or lost." They are also at the front lines of climate change consequences, especially coastal cities, he added.  The UN chief underscored that four billion people live in urban areas today, and the population of city-dwellers is expected to grow by another 2.5 billion by 2050.

At September's climate summit, more than 70 countries committed to zero carbon emissions by 2050,  and a number of initiatives are helping beef up efforts to combate the climate crisis.

Among them are, the Leadership for Urban Climate Investment financing mechanism, the Cities Climate Finance Gap Fund for urban infrastructure, and the Zero Carbon Buildings for All initiative.

The C40 Summit "is an important step on the journey for progress - to share best practices" he said.  "A greener future has started, it's gaining momentum...but we still have a long way to go. We are not yet there."

The C40 World Mayors Summit will run from 10 to 11 October, with side events scheduled for 9 and 12 October. 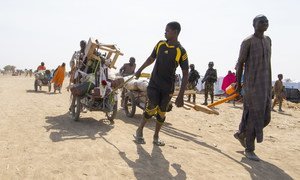 A new UN refugee data centre will improve the way humanitarian agencies support “some of the most dramatically vulnerable people in the world”, UN chief António Guterres said on Thursday.

Speaking in Copenhagen, at the launch of the centre, Mr. Guterres said that many decisions are based on incorrect information, because key data needed to identify problems and solutions, does not exist.

However, by establishing centres of excellence, which effectively collect and use data, the UN system can rectify the problem, and help policy-makers find solutions to humanitarian crises. 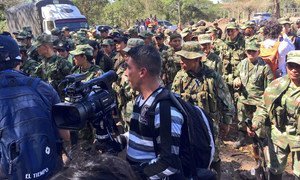 Despite the announcement by some FARC-EP (Revolutionary Armed Forces of Colombia) leaders in August of a return to the battlefield, in the face of what they see as Government betrayal, Carlos Ruiz Massieu, the UN Mission’s Special Representative, said “it is important to emphasize the commitment of these former combatants to the peace process.” 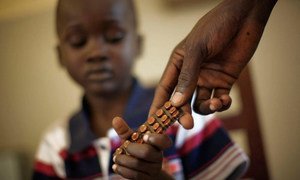 Donors have pledged just over $14 billion for the next three years to save 16 million lives and help end AIDS, tuberculosis and malaria by 2030.

The commitments were made on Thursday at the Global Fund’s Sixth Replenishment Conference held in Lyon, France.

The international partnership raises, manages and invests money to support programmes in more than 100 countries that address the three diseases, mostly in sub-Saharan Africa.

The Fund reported that many donors at the conference stepped up their pledges, citing the urgency to take decisive action.

Listen to or download our audio News in Brief for 10 October on Soundcloud:

♦ Receive daily updates directly in your inbox - Subscribe here to a topic.
♦ Download the UN News app for your iOS or Android devices.
syria|turkey|Copenhagen|climate change|data|humanitarian crisis|Colombia|Guerillas|AIDS|tuberculosis|Malaria