“The Secretary-General condemns today's terrorist bombings in Ankara, Turkey. The attack during a peaceful gathering has reportedly claimed the lives of dozens or people and injured more than 126 others,” said a statement issued by his Spokesperson.

“The Secretary-General expects the perpetrators of these terrorist acts to be swiftly brought to justice,” the statement continued. “He sends his heartfelt condolences to the families of the victims, as well as to the people and the Government of Turkey, and wishes those injured a speedy recovery.”

President of the UN General Assembly Mogens Lykketoft joined the Secretary-General in condemning the bombings.

“As a representative of all the member states of the United Nations, the President of the UN General Assembly expresses solidarity with the Turkish Government and the Turkish people and reaffirms the UN's undeterred resolve in the fight against the shared threat of terrorism,” said Mr. Kykketoft in a statement.

“The President sends his deepest condolences to the loved ones of all those who have been murdered and he wishes the injured a swift recovery,” he continued. “This brutal attack is a cowardly and senseless act and will not stop the people and nations striving to build a more peaceful, harmonious and sustainable world.” 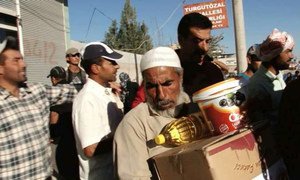 United Nations Secretary-General Ban Ki-moon has condemned today’s series of terrorist attacks in Turkey, including on the security forces, both in Istanbul and in the south-east provinces, as well as on the United States Consulate in Istanbul.