UNICEF/Christine Nesbitt
A health worker measures a baby girl’s arm, at an outpatient therapeutic feeding centre at the Protection of Civilians site on the UN peacekeeping mission in South Sudan (UNMISS) base in Malakal, capital of Upper Nile State.
9 September 2015

“Last year we helped avert a famine. Now we must increase our efforts to avoid a catastrophic loss of young children’s lives,” said Jonathan Veitch, the Representative of the UN Children’s Fund (UNICEF) in South Sudan.

UNICEF and the World Food Programme (WFP) jointly announced the launch of an enhanced joint nutrition response plan covering all states in South Sudan, which will see both agencies and their partners assist over two million people – children, pregnant women and new mothers – for the treatment and prevention of acute malnutrition in the country until May 2016.

The two agencies began the joint nutrition approach last year, helping to avert famine and save lives by reaching one million people using joint rapid response teams in the conflict-affected states and ramping up the response in non-conflict states, according to the announcement.

“In the first year, we worked under extremely difficult conditions to bring much needed nutrition assistance to as many people and as many places in the country as we possibly could,” said Joyce Luma, the WFP Country Director in South Sudan. “Looking forward, we want to improve on the quality of nutrition services to continue to prevent and treat acute malnutrition.”

The nutrition response plan will work to address the root causes of malnutrition, such as poverty, inadequate water and sanitation, and infant and young child feeding practices.

“While a peace agreement signed in August provides hope for the new country, basic health and nutrition services remain out of reach for much of the population,” said the announcement. Since April, intense fighting has forced hundreds of thousands to flee into the bush or swamps for protection, where they are cut off from humanitarian assistance.

“Basic services that were re-established over the past year have been destroyed, including hospitals, clean water, nutrition treatment sites – both out-patient and in-patient facilities,” the announcement added.

Since fighting broke out in December 2013, more than two million people have been uprooted from their homes in South Sudan, more than half of them children.

The nutrition programme in South Sudan is funded by, among others, the European Commission, Japan, Norway, Switzerland, the United Kingdom, and the United States. 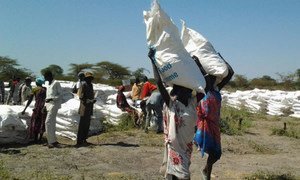 Emergency relief teams from the United Nations have managed to reach more than 27,000 people in a town in South Sudan cut off by insecurity since March where “there were only some fish and a few tomatoes for sale in the market, and almost nobody had the means to buy them.”