UNMISS/Isaac Billy
Under-Secretary-General for Peacekeeping Operations Hervé Ladsous on a visit to the protection of civilians area at the UNMISS base in Tomping South Sudan on 3 February 2014.

“It is going to be a very long, complex process to address all the deep roots of this very big crisis,” Under-Secretary-General for Peacekeeping Operations Hervé Ladsous told reporters after briefing the Security Council on the crisis, including efforts by the Intergovernmental Authority on Development (IGAD), a regional East African body that is mediating peace talks in Addis Ababa, Ethiopia, in which the two sides signed a ceasefire accord last month.

“But of course, it is important that the entire international community express total support for IGAD because it is the only diplomatic initiative.”

He said the UN Mission in South Sudan (UNMISS), whose authorized strength the Council doubled to nearly 14,000 uniformed personnel when the crisis erupted in December, was focused on four tasks: protection of civilians; safeguarding human rights; support to humanitarian actors; and support for the IGAD mediation process.

Thousands of people are believed to have been killed and some 870,000 others have fled their homes, 145,000 of them to neighbouring countries and 75,000 to UN bases within the country, since fighting broke out on 15 December between the forces of President Salva Kiir and deputy president Riek Machar.

The ceasefire has led to a relative lull, but the UN Office for the Coordination of Humanitarian Affairs (OCHA) warned today that even before the crisis, the humanitarian situation in South Sudan was critical, with more than 3 million people, more than a quarter of the total population, facing food insecurity, while most families have lost any means of providing for themselves because of displacement, looting and the destruction of their property.

Most of those displaced have not yet received help due to continued insecurity, although humanitarian partners have assisted 300,000 people. It is essential that conditions are created to allow for the safe return of internally displaced people, OCHA stressed.

In another troubling development, a UN Mine Action Service team working with UNMISS last week found unexploded cluster bomblets along the road from Juba, the capital, to Bor.

These weapons are unreliable and indiscriminate, potentially posing long-term danger to civilians and vehicles, and in line with the Convention on Cluster Munitions, the UN is firmly committed to ending their use, stockpiling, production and transfer. 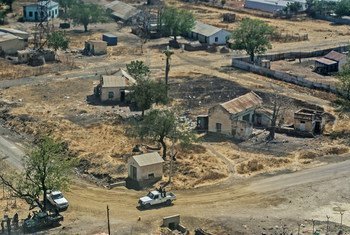 7 February 2014
The United Nations has extended its relief operations in the South Sudanese town of Malakal, scene of some of the fiercest fighting between Government and opposition forces, moving outside its base where it is sheltering 28,000 civilians to reach 10,000 others driven from their homes.