27 August 2015
Emergency relief teams from the United Nations have managed to reach more than 27,000 people in a town in South Sudan cut off by insecurity since March where “there were only some fish and a few tomatoes for sale in the market, and almost nobody had the means to buy them.”

“With little or no services available, children are going without nourishing food and healthcare in these villages,” said Jonathan Veitch, Representative for the UN Children’s Fund (UNICEF) in South Sudan.

“It is a desperate situation,” he added during a visit to the town of Wau Shilluk, on the west bank of the Nile River, across from the capital of Malakal in South Sudan’s Upper Nile State.

“In the past several months, access problems and concerns for staff safety have prevented humanitarian agencies from reaching people living in Wau Shilluk and other areas of rural Upper Nile,” UNICEF said in a joint press release with the UN World Food Programme (WFP). “Many agencies have been forced to scale down their operations on the west bank of the Nile because of insecurity.”

Since fighting broke out in South Sudan in December 2013, more than 2 million people have been uprooted from their homes, and 4.6 million people face severe food insecurity.

The World Food Programme and UNICEF, together with their partners, have reached more than 1.3 million people, including 220,000 children under the age of 5, in the most hard-to-reach areas of the country since they began deploying the joint teams known as Rapid Response Missions more than a year ago.

And this week, after being denied access due to insecurity since March, the World Food Programme and UNICEF deployed a mobile emergency relief team to assist more than 27,000 people in Wau Shilluk.

“We could see that people are struggling; there were only some fish and a few tomatoes for sale in the market, and almost nobody had the means to buy them,” said Valerie Guarnieri, the WFP Regional Director for East and Central Africa. 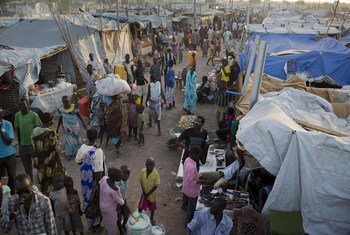 14 August 2015
The United Nations humanitarian wing has reported that the month-long restrictions on the movement of goods by air and river routes in South Sudan have been lifted, allowing delivery of aid supplies in crisis-torn Malakal, and has warned of a “dire situation” as fighting continues.