UNESCO/F. Bandarin
UNESCO and the European Union have undertaken to reconstruct the cultural heritage of Timbuktu.
16 May 2014

The United Nations and the European Union have forged an agreement today to fund the restoration of cultural heritage in Timbuktu that was destroyed by extremists after fighting broke out in 2012 between Malian Government forces and Tuareg rebels.

With 500,000 euros provided by the European Union, the UN Educational, Scientific and Cultural Organization (UNESCO) will coordinate the reconstruction of destroyed mausoleums, the rehabilitation of mosques and private libraries, as well as ancient manuscript conservation projects. Local personnel will also be trained to ensure lasting preservation.

Timbuktu was an economic, intellectual and spiritual capital and a centre for the propagation of Islam throughout Africa during the city’s golden age in the 15th and 16th centuries.

UNESCO Director-General Irina Bokova welcomed the support extended to Mali and the heritage reconstruction project by the European Union and other donors.

“The agreement signed today shows that we are on track,” she stated in a news release. “Two mausoleums have now been rebuilt and this new agreement comes at an opportune moment to speed up work underway and ensure that the people of Mali can reclaim heritage that is essential to their identity and that can contribute to reconciliation.

“This is vital for Mali and is important for the rest of the world because World Heritage is common to us all,” she said.

Fourteen of the 16 mausoleums of Timbuktu inscribed on UNESCO’s World Heritage List were destroyed by armed groups during the conflict. The manuscripts of Mali constitute a unique documentary collection that bears testimony to the history of Africa and of humanity as a whole.

During the conflict, more than 4,000 of the 40,000 manuscripts kept at the Ahmed Baba Institute were lost. Some were burned or stolen, while more than 10,000 remain in a critical condition. Local communities secretly transferred more than 300,000 manuscripts to the capital, Bamako. They are now conserved in conditions that are not optimal for their safeguarding, according to UNESCO.

The heritage project will be led in cooperation with the Malian Ministry of Culture, Higher Education and Scientific Research, with logistical support from the UN Multidimensional Integrated Stabilization Mission in Mali (MINUSMA). 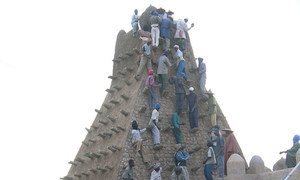